MONTREAL -- The Plante administration is making a significant investment in the safety of pedestrians.

As of 2022, all traffic lights in Montreal will be equipped with pedestrian crosswalk lights and a digital countdown. The city's entire set of traffic lights will also be reprogrammed to add four to six seconds of crossing time for pedestrians.

Pedestrians near CLSCs, hospitals, daycares and elementary schools will be given extra time to cross, and busy intersections will also be reviewed to determine if extra time should be added there, too.

"These interventions are essential to improve our road safety record," said Montreal Mayor Valerie Plante. "We need to make a decision as a society -- what is more important, the lives of people or to be more fluid in a way that it goes faster? To me the choice is obvious; it will always be security."

In 2018, 18 pedestrians were killed on Montreal streets and another 87 were seriously injured. Nineteen pedestrian deaths have already been recorded in 2019.

The move is part of the city's Vision Zero project, an internationally recognized road policy that aims to eliminate fatalities and serious injuries due to traffic collisions, using concrete steps to improve safety for cyclists and pedestrians.

Of the city's 2,300 intersections with traffic lights, 1,985 will be under review for added crossing time.

Pedestrian crossing lights will be added to the 1,300 intersections with traffic lights that do not have them in place.

The city said 315 intersections are already protected, requiring no changes. 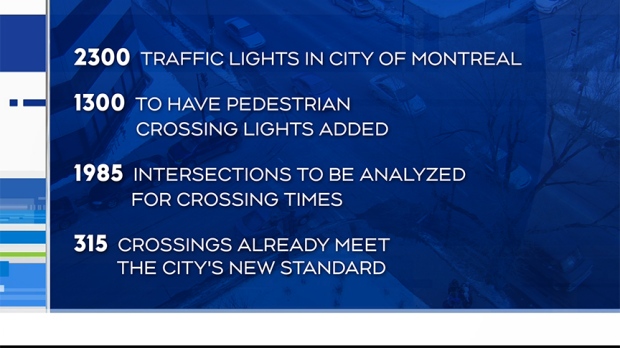 "We have noted, on too many occasions, that citizens - whether young families, seniors or people with reduced mobility - were struggling to cross intersections with the time allotted. We have therefore decided to extend the time provided by the pedestrian lights to allow pedestrians to cross at their own pace and safely. This adjustment will be implemented on all Montreal pedestrian lights," said Éric Alan Caldwell, Montreal's executive committee member in charge of the project.

Last week, an 89-year-old man was killed crossing a busy intersection in NDG, where local advocates had long called for improvements to pedestrian safety.

While the initiative targets drivers and vehicles, police say some of the onus falls on pedestrians.