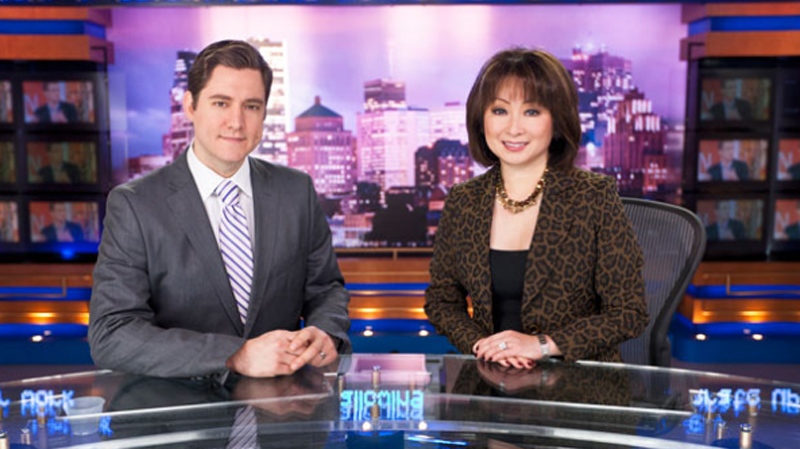 Paul Karwatsky (left) seen with Mutsumi Takahashi, will continue to anchor the news on CTV Montreal.

MONTREAL - CTV Montreal confirmed Wednesday evening that Paul Karwatsky has been named the permanent co-anchor of its flagship 6 p.m. newscast.

Karwatsky, who was born and raised in Montreal, has been anchoring the weekend news at 6 p.m. and 11:30 p.m. for the last three years.

Two weeks ago Karwatsky was put into the saddle as interim anchor alongside Mutsumi Takahashi on the noon and six p.m. weekday newscasts.

There was no time to get the Interim title printed on his business card because, as Jed Kahane, the station's Director of News and Public Affairs noted, audiences immediately responded favourably to his work alongside Takahashi.

"Paul is a native Montrealer with a passion for news, this city and the province," said Kahane. "His authenticity and credibility have always resonated with our viewers, and we are delighted to see him step into this new position and this new challenge".

Karwatsky's connections to the community run deep, having been raised in the St-Leonard area in a family with roots in the city's Ukrainian population. He studied journalism and political science at Concordia and joined the CTV team as reporter in 2005, covering everything from elections to organized crime.

"I've been at CTV for seven years, but really I've been connected to the station my entire life, as a viewer," said Karwatsky.

"To have the opportunity to step into this position is an incredible honor, but also a great challenge as a journalist who takes his responsibility to the public very seriously."

His co-anchor is thrilled with the choice of Karwatsky, who replaces Todd van der Heyden, the longtime co-anchor who recently joined the CTV team in Toronto.

"I'm absolutely delighted to be working alongside Paul," said Mutsumi Takahashi. "I've come to know him not only as a good friend, but as an outstanding journalist and I think he'll bring new energy and a new perspective to our newscasts."

Finding talent from within was a priority for CTV brass, as it strives to maintain the sense of connectedness that has helped it remain so popular within the Montreal viewership.

"Continuity is one of the great strengths of CTV Montreal," said incoming Vice-President and General Manager Louis Douville. "So being able to look to our own staff and promote from within is something I think our viewers will embrace. Paul knows our audience well, and they know him."

Karwatsky, a 31-year-old father of two young children, continues the legacy of youthful anchors at the station, having replaced Todd van der Heyden, who is also in his thirties.

Karwatsky's wide range of interests include traveling the world, but he has now put backpacking on hold to take on the adventure of anchoring the city's longstanding leading English language TV news broadcast.