Police say the official death toll now sits at 10 after the fatal fire ripped through a Quebec seniors' home in L'Isle Verte earlier this week.

Investigators at the scene of a deadly Quebec seniors' home fire say they still haven't formally determined the cause of the devastating blaze, which left an additional 22 people unaccounted for.

The coroner’s office announced Saturday afternoon that it had identified Juliette Saindon, 95, and Marie-Laureat Dube, 82, as two of the victims that perished in the fire. The third victim's name has not yet been released.

Earlier Saturday, Quebec Provincial Police Lt. Guy Lapointe stressed that the investigation is ongoing, saying that reports that a cigarette was behind the fire is only one scenario that investigators are looking into.

"That’s one hypothesis," he said during a news conference. "There are many that are still on the table."

Meanwhile, emergency crews resumed their recovery efforts Saturday morning after a 12-hour break from the frigid temperatures that have gripped the region.

Lapointe said that rescue crews are dealing with a 60-centimetre-thick layer of ice at the scene, which had formed soon after the blaze was extinguished Thursday at the Residence du Havre seniors’ home.

"We're talking two feet (of ice). You can imagine how difficult it is to go through the ice, melt it and, again, do it in a way that we preserve the integrity of the potential victims," Lapointe said.

He said the public can "assume the worst" about the residents that remain missing, but added officials won't confirm any deaths until bodies are recovered.

Meanwhile, it’s also been announced that a special memorial service will be held Sunday afternoon for those directly affected by the deadly fire.

“It is truly with broken hearts that we gather in the church to comfort each other, to find strength and to grieve,” Frigon said, speaking in French.

He suggested that family members could bring photos of their loved ones to display, calling the service a “first step” toward overcoming the tragedy.

Frigon added that an official memorial mass with dignitaries and the broader public will take place on Feb. 1.

Quebec Premier Pauline Marois is expected to attend tomorrow’s ceremony, having cut short her trip to Davos, Switzerland, where she was attending the World Economic Summit.

The three-storey residence housed dozens of seniors, some of whom were fully autonomous, and many more who had limited mobility.

Twenty people managed to escape during the fire. A number were taken to hospital, including 13 people who had suffered carbon monoxide poisoning or had fallen ill.

The Red Cross said Saturday it has raised $200,000 to assist survivors of the blaze; the money will be used to replace necessities like walkers, wheelchairs and hearing aids, as well as provide financial support to the families of the victims.

The Red Cross added it had raised enough money to help the fire victims, and any additional donations will go toward supporting the organization's day-to-day activities.

Local MP Francois Lapointe told CTV News Channel Saturday that as fundraising efforts mobilize, the mood in the community is starting to shift.

Francois added there’s many people “putting more energy than you can think of to try to help the situation. It’s very, very impressive.” 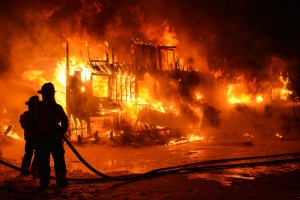