Mystery of Quebec City: potential world capital chooses not to be one 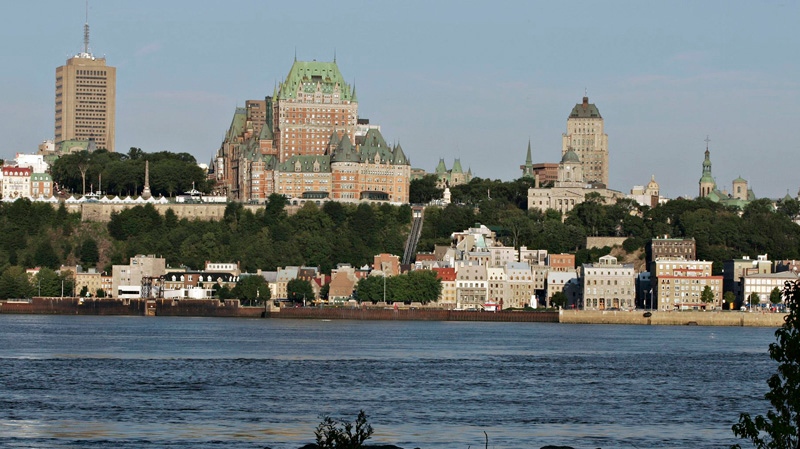 So what's holding up the plan? For starters, it turns out that Quebec independence doesn't get much support from the voters in the capital region.

The phenomenon is part of what locals call "le mystere de Quebec" -- "the mystery of Quebec City."

The population of the Vieille Capitale, and its surrounding area, sits in a region where voters have surprisingly spurned sovereignty. It is also an island of conservatism in a province commonly regarded as an ocean of leftists.

It's been this way for years.

The territory, which holds about one-tenth of provincial seats, represents a puzzling swath of Quebec. In the last few provincial and federal elections, it has primarily elected political parties that either oppose sovereignty or want to push the debate to the side.

Voters here have supported conservative policies such as smaller government -- despite the fact that Quebec City is a government town full of public employees. Then they flipped to the left-leaning New Democrats in last year's federal election.

These recent elections have something in common: pro-independence parties have been resoundingly drubbed.

In next week's provincial election, the area could follow a familiar pattern. The campaign began with the governing Liberals hoping for a sweep and planning to take away the last remaining Parti Quebecois seat in the region.

Now there are signs in the polls of another shift to a new party -- the Coalition Avenir Quebec which, much like this region, is just a little nationalist, just a little right of centre, and doesn't feel much like talking about independence.

While PQ Leader Pauline Marois is seen as the overall front-runner in the province, in Quebec City her party is just hoping to save the furniture.

"The vote in the Quebec City region is for 'Anybody but Pauline,' " Dominic Maurais, host of the No. 1 mid-morning radio talk show in Quebec City, says in channelling the position of his listeners.

"We're ready in certain ridings to hold our noses and vote Liberal. Pauline Marois is not liked here."

Many believe the anti-sovereigntist sentiment exists in the public service and is a spillover from the highly entrepreneurial Beauce region nearby. The Beauce, between Quebec City and the U.S. border, represents the Harper Tories' only hotbed of support in the province.

An early sign that the capital had changed, politically, came in the 1995 referendum. Sovereigntists could scarcely believe their eyes when they saw the vote results for the region roll in at 54.4 per cent. They had expected the region to be a big vote-booster.

Some still blame Quebec City voters for kneecapping their dream of independence.

One recent poll of voters in the region suggested that only 34 per cent of respondents supported pro-sovereigntist parties, including 24 per cent for the PQ. The Segma survey showed that the fledgling Coalition had the most support, at 34 per cent while the Liberals had 29 per cent.

The airwaves of Quebec City are home to wildly popular talk-radio shows, featuring opinionated hosts, guests and callers who rant their support of more-conservative ideals.

Many non-fans dismissively refer to these programs as "radio poubelle" (trash radio) and blame the region's streak of conservatism on the influence of these shows.

Maurais despises the trash-radio moniker, saying it's an unfair name given by "leftists" who don't agree with the politics. He also argues that the content is driven by listeners, not the other way around.

He made the remarks in an interview following an on-air segment which featured an economist warning about the dangers of the PQ's policies.

Maurais frequently pokes fun at Marois on his edgy CHOI 98.1 show. He says the local disdain for the PQ comes from its push for a referendum and its language policies.

He said locals fear that its policies will limit job opportunities for people in the region who want to open themselves to the world.

"(These are) Quebecers who watch American TV, who go to France, who go to California... For whom Quebec sovereignty is not important."

One Beauce resident, Carl Barrette, said it's time to shelve the push for sovereignty and embrace new ideas that focus on putting more money in people's pockets.

"Maybe we would like to be sovereign, but it's not that important," said Barrette, as he headed to the Expo Quebec fair.

"I think the rest of Canada is fed up of hearing about (Quebec) independence."

Despite the obstacles, the PQ has not given up on a city Marois views as strategic and even hallowed ground.

The PQ leader emphasized the importance of the area recently in a speech to some 1,500 party supporters who crammed into a Quebec City theatre for a boisterous rally.

"I need Quebec City in a Parti Quebecois government," said Marois, who was born and raised there.

PQ hopes of maintaining a foothold here rest on the shoulders of Agnes Maltais, who was first elected in 1998 and who is now the party's only member left in the area.

A spokeswoman for the Yes committee during the 1995 referendum campaign, Maltais believes support for sovereignty in the Quebec City region is stronger than people believe.

She noted how the PQ swept through the territory following the demise of Liberal regimes in 1985 and 1994.

But she acknowledged it's also the same region that put the Liberals back in power in 2003, awarded seats to the surging ADQ in 2007, and then took most of them away the following year.

"The region is very pragmatic," Maltais said in an interview at her bustling riding office in the lower city.

"The region will often vote for power. The national assembly is very close by, so it's one of the first regions to decide that it wants change."

People in the Quebec City area, she says, are also very engaged because of the popularity of politically charged talk radio.

"It's a region that's difficult to navigate politically," she said. She credits her own success in her downtown riding to her deep roots in an urban enclave that she compares to a microclimate of Montreal's inner-city, left-leaning areas.

But the CAQ candidate in the suburban Quebec City riding of Vanier-Les Rivieres said the region is actually quite easy to decipher.

Sylvain Levesque, who twice ran unsuccessfully for the PQ in the district, insisted that Montreal is the place that people can't figure out.

"The real mystery is in Montreal," he said.

He asks how voters there remain predictable, election after election, despite scandals and broken promises.

"The people of Quebec City shop around every election," Levesque said.

Quebec City voters follow politics closely, he added, with the help of the local media -- including opinion radio stations.

Maurais' show mocks the sovereignty movement with segments introduced as "Here is another sovereignty miracle with Maurais!" and "Maman Pauline."

"The little marvellous world of Maman Pauline where everyone speaks French and all the Anglos have moved to Cornwall," Maurais says sarcastically into the microphone.

In one recent stunt his show dialled up English speakers in a wealthy Montreal neighbourhood. The Anglos were informed they would have to pass a French test in order to vote in the upcoming election. Some were outraged. Others were skeptical.

Eventually, word got back to the provincial elections authority, which urged the station to stop scaring people. But Maurais says he wasn't trying to scare anyone.

He says he was satirizing the PQ's language policies.

Maurais told his listeners how, for once, he would like a political party to promise to attract rich people to the region, so they could help create more jobs.

"I would like to hear some (political parties) talk about wealth and entrepreneurship instead of talking to me strictly and uniquely about the language," Maurais said.

"I think that would be refreshing."