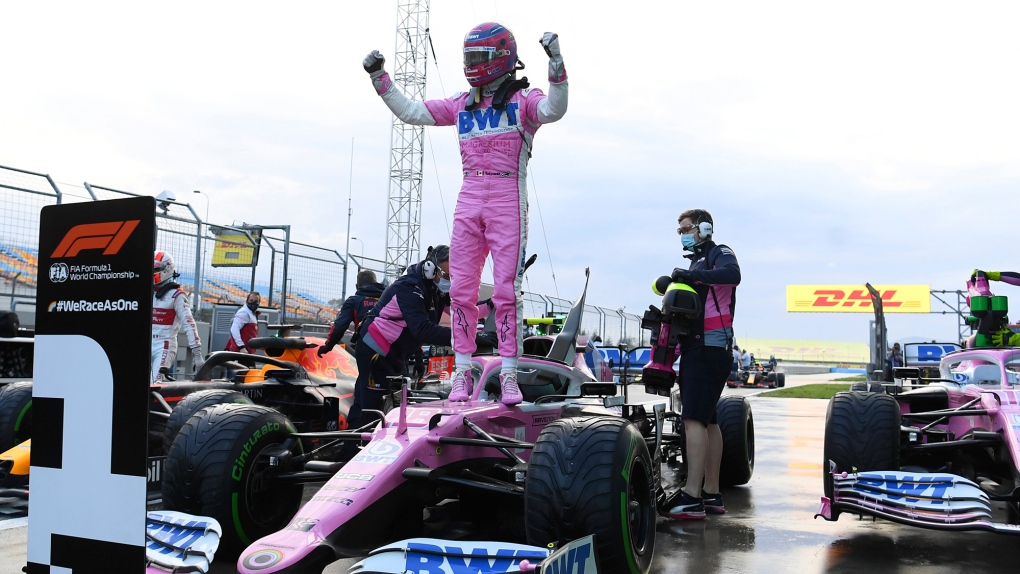 TURKEY -- Racing Point's Lance Stroll sought an explanation after his hopes of a first Formula One victory disappeared with a change of tires in Turkey on Sunday.

The Montrealer finished ninth after starting on pole position for the first time, an outcome Stroll described as "pretty terrible."

"I don't know what happened. It's just I don't understand," he said.

"We had so much [tire] graining on the first set of intermediates that we decided to pit because we were just losing seconds a lap. I just don't know where that graining came from, it just happened instantly."

Stroll, whose pole ended a run of 14 in the top slot by Mercedes, had led away from the start on a wet and slippery circuit and was still in front until his second pitstop on lap 36 of 58.

"We started the race on full wets, then we put an inter on and I was quite far up the road," Stroll said.

The second set of intermediates was like a lead weight in performance terms and he dropped back down the order.

Teammate Sergio Perez, who is leaving at the end of the year and has yet to find another seat, started third but finished second after stopping just once and making his tires last 48 laps until they were about to burst.

Stroll is the first Canadian to score a poll position since Jacques Villeneuve.

Stroll said that while he was happy for the haul of points that lifted the team to third overall, he did not understand why his car was impacted more.

"It's just frustrating when you're in the lead by 10 seconds and then all of a sudden, you finish ninth," he said. "We just need to look into why it hit me so much harder than the other car. I'm not sure why."

-- This report was first published by The Associated Press on Nov 15, 2020. Editing by Alan Baldwin and Toby Davis