Grade 6 students at Westmount Park Elementary school are making stuffed animals for Ukrainian refugee children. It's a learning and a giving experience for the students, says the school -- and they've already doubled their donations.

They planned on making 50 but have already sewn up 100 cuddly, stuffed bears to share.

"I have a personal connection with my own stuffed animals and I feel they'll have a connection as well," said Zachary Agulnik, a Grade 6 student.

Colourful and comforting, the bears will go to young refugee children in the hopes of offering a little comfort for kids living through a crisis.

In addition to being aware of the headlines coming out of Ukraine, these students did their homework. They're reading a historical fiction classroom novel called "Refugee."

"On the outside, it's like, a cliché, but when you get into it I'm very engaged in the book and you can really empathize and sympathize with the characters," said Joseph Lorimer. 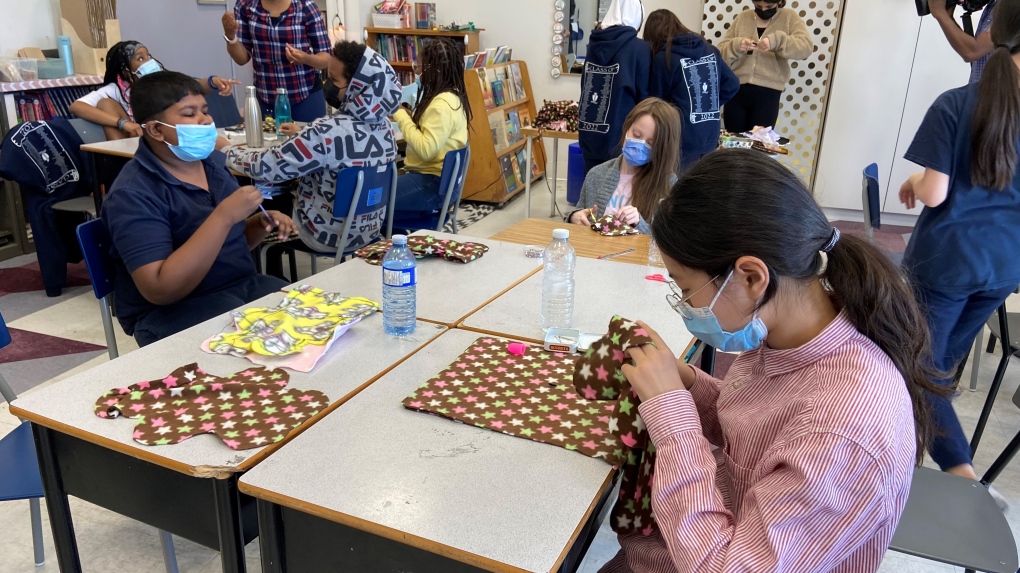 "The best part is learning about the refugee kids who don't have anything, while we have the stuff that we want,” she said.

The class project of building 100 bears is supported by the English Montreal School Board.

"It has to be focused and centered around multi-culturalism and humanitarianism," said Sabrina Pianese, the teacher who came up with the idea.

She also researched the Dolls of Hope non-profit organization, which, since 2016, has gifted handmade bears and dolls to more than 50,000 children in 41 countries. Dolls of Hope will make sure the dolls made here go where they will be appreciated.

"I love the fact that we're helping kids who have very little or nothing at all, and we feel like we're making a difference in someone's life," said teacher Cherilyn Pierre.

"I know that the kids that get them are going to be really happy because it's gonna be like, somebody from another country went out of their way to make a stuffed animal," said Westmount student Nicole.

The students are also learning new skills: making patterns, cutting the outlines, sewing the pieces together and embroidering the faces.

"I'm learning how to stitch. [I] never did this before, it's pretty hard, but easy when you get it," said Lamar Aljohani.

But as their teacher points out, the takeaway is so much more than sewing: "This project has brought out their maturity, empathy and compassion," she said.