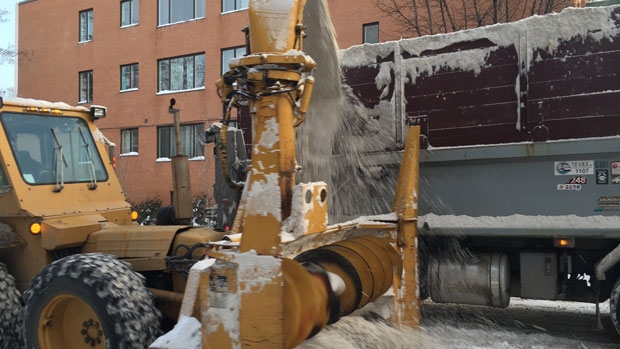 MONTREAL -- Montreal’s first significant snow-clearing operation of 2020 is going smoothly, with 95 per cent of precipitation picked up one day ahead of schedule, according to City of Montreal spokesperson Philippe Sabourin.

“The snow was the consistency of mashed potatoes because of the mild weather, ”Sabourin explained. “So, it was easier on the snow blowers.”

The snow-clearing operation got underway last Thursday at 7 a.m. By day two, the temperature had climbed to five degrees Celsius.

Usually, it takes city workers about four-and-a-half days to clear up to 21 cm of snow, but according to Sabourin, the vast majority of boroughs had clean streets in only three-and-a-half days.

The timing of the snowstorm also helped speed up the work this time around, he explained, because there were fewer cars on the road to get in the way of the plows and trucks.

Nevertheless, Sabourin says workers still had to contend with lots of parked cars on city streets – about 2,000 vehicles per day had to be towed, which is on par with the average snow clearing operation.

Not to mention, car owners get slapped with a $150 fine for ignoring the orange signs that note parking restrictions.

The city’s spokesperson says only a few complaints came through the city’s 311 line – mostly about orange warning signs that people insisted went up too early.

City crews are expected to pick up any remaining snow Monday. Residents can track their progress on the Info-Neige website.