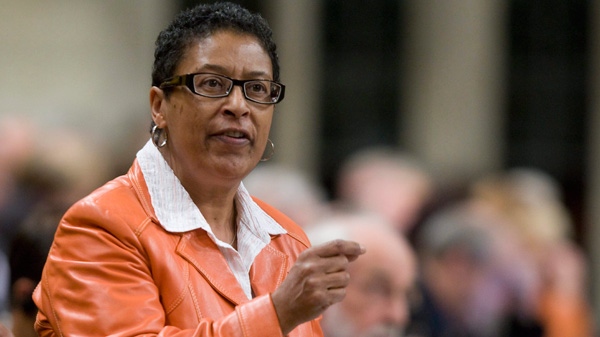 Liberal MP Marlene Jennings rises to question the government during Question Period in the House of Commons on Parliament Hill in Ottawa, Tuesday, Oct.6, 2009. (The Canadian Press / TCPI / Adrian Wyld)

MONTREAL - Changes to the EMSB's governance structure will have "no noticeable impact" on staff and students, the board's director general said on Thursday.

In a separate press release, the board criticized the CAQ's "smear campaign" against them and asked for the trusteeship to be lifted and for the EMSB, and other English school boards, to be exempt from Bill 40, which would abolish school boards.

Director General Ann Marie Matheson said the education minister's decision to suspend EMSB commissioners' duties and transfer responsibility to a trustee would not affect the day-to-day activities of the board's schools.

"The service departments of the board will continue to provide important resources to our school teams," she wrote. "The same knowledgeable and caring principals, teachers and staff will continue to work with the students. And ultimately, the educational success of our students will remain the primary mission of the EMSB."

Yesterday, the education minister announced that Former Liberal MP Marlene Jennings would govern the board for six months.

Education Minister Jean-Francois Roberge has accused the EMSB commissioners of mismanagement and improper use of funds, citing two recent government reports.The board countered, accusing the education minister of conducting a smear campaign as the governing CAQ party works to abolish school boards.

Matheson acknowledged in her letter on Thursday that some of the effects of Jennings' trusteeship were unknown.

"There are many questions about what this new governance structure will mean in practical terms. As soon as we receive more information, I will share it with our community," Matheson wrote.

"Despite some administrative processes that need improvement, the EMSB, with a 92.4 per cent student success rate - the highest of all public school boards in Quebec, remains an education leader in the province and we all have much to be proud of!"

In a separate press release on Thursday, the EMSB criticized the education minister and accused the CAQ of targeting the EMSB because of their Bill 21 court challenge.

"We can’t help but wonder if the unjustified attacks on the EMSB have been motivated by the CAQ government’s effort to justify abolishing school boards in favour of service centres and in retaliation for our court challenges related to Bill 21 and the transfer of our schools to the French sector," board representatives wrote.

They asked the CAQ to remove "the threat of trusteeship" and requested to be exempt from Bill 40, which would abolish school boards.