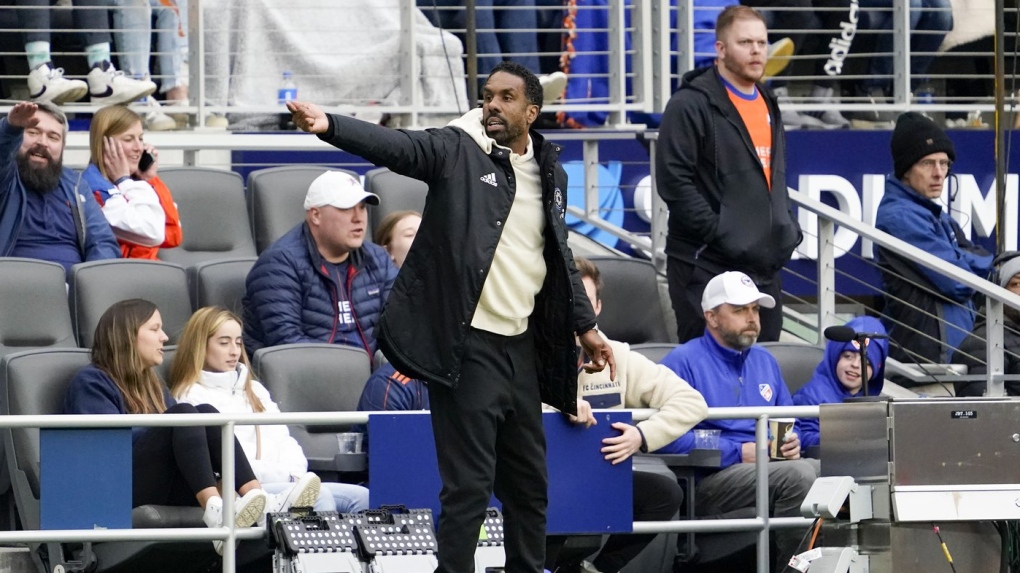 CF Montreal head coach Wilfried Nancy stands in the technical area during the second half of an MLS soccer match against FC Cincinnati, Saturday, April 2, 2022, in Cincinnati. (THE CANADIAN PRESS/AP/Jeff Dean)

CF Montreal head coach Wilfried Nancy isn't one to focus too much on the standings.

He believes that getting caught up in other teams' results and recent scores from around the league can be a distraction.

However, in the midst of a four-game unbeaten streak (3-0-1) and with the return to form of many key players, Nancy can't help but take stock.

"I'm staying focused on what I've said since the beginning; we need about 14 or 15 wins (to make the playoffs)," said Nancy after a dramatic 2-1 win in Columbus on Wednesday night. "Two days ago, I looked at the standings and I saw what is happening around the league, but for the moment, let's focus on the two or three more wins and go from there."

Montreal won't have much time to celebrate Wednesday's win, in which they came back from 1-0 down to snatch a 2-1 victory in the final five minutes of the game with goals from Kei Kamara and Joel Waterman.

The club now gears up for another team in playoff contention in Miami (8-10-5).

The Florida club enters the match with 29 points, the same as Charlotte, which holds the seventh and final playoff spot in the East.

Charlotte has the tiebreaker with one more win than Miami.

Despite a recent run of inconsistency, Miami's offence has been firing on all cylinders, scoring eight goals in their last four MLS games.

They'll present another test for a Montreal defence that has only recently found form.

"Now we're looking to get another three points on Miami because it's a quick turnaround and we have to shift our focus," said Waterman after scoring the winning goal Wednesday. "I just want to get the points. I don't care who scored but it's special to help the team out in this way for sure."

Montreal has a 3-1-0 record against Miami, having lost their last meeting in July of last year after a Gonzalo Higuain brace.

The Argentine is in good form and will be looking to replicate that performance, entering the contest with five goals in his last five games.