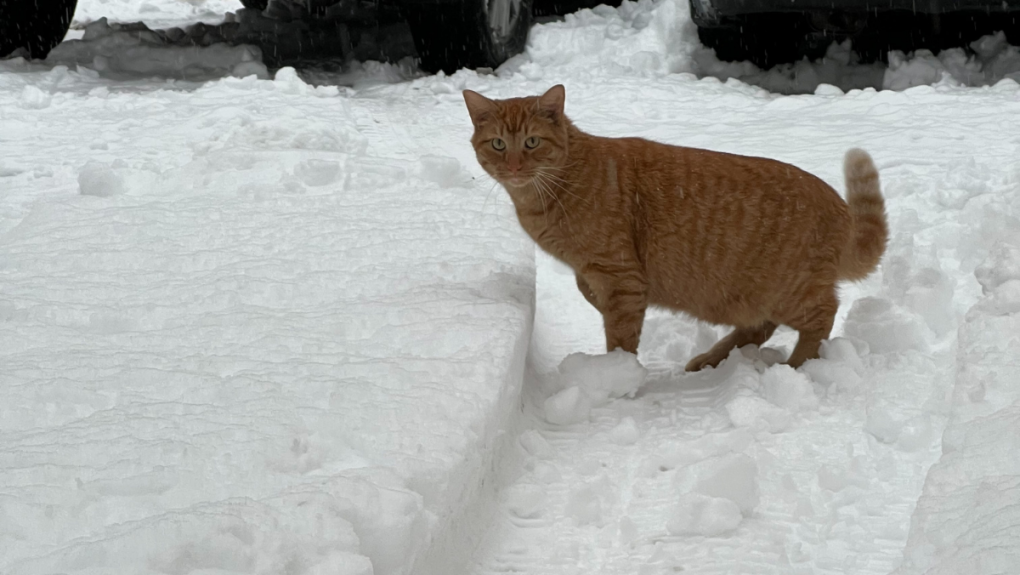 A cat's ability to land on its feet is helping researchers learn more about spinal injuries. (Daniel J. Rowe/CTV News)

The legendary ability of cats to land on their feet could one day help humans walk better after a spinal cord injury, according to research conducted at the University of Sherbrooke.

The findings, discovered by professor Alain Frigon and his colleagues, could also help seniors whose sense of balance is becoming more precarious.

"In the course of evolution, humans have decided to adopt the most unstable walking position possible," said Frigon, from the Department of Pharmacology-Physiology at the University of Eastern Ontario.

Although humans "have a much more sensitive, much more important control of balance" than quadrupeds, he continued, explaining how the study of four-legged animals could one day help us bipeds, "the circuitry as such" remains the same.

"It's just that there are additional mechanisms" in humans, said Frigon, whose laboratory is interested in gait control and the basic principles of gait recovery after spinal cord injuries, among other things, by trying to unlock the secrets of the central nervous system.

The researchers were more specifically interested in somatosensory feedback, i.e. receptors in the skin, muscles or joints that send information to the central nervous system, i.e. to the spinal cord and the brain.

Mice, because they are so stocky, are less likely to lose their balance if this feedback is missing. That's not the case for cats or humans.

So if you want to generate results that can eventually be applied to humans, Frigon said, you have to eventually "work with larger models that have more similar control, a high centre of gravity, similar musculature," especially since the organization of the spinal cord in mice is not at all like that of humans.

In collaboration with researchers from the American universities Georgia Tech and Drexel, Frigon wanted to better understand how this somatosensory feedback allows the cat to coordinate the movement of its four legs.

He specifically stimulated - in cats trained to walk at human speed on a treadmill - the superficial peroneal nerve to simulate a stumble (the equivalent, for a hiker, of hitting a rock or root with the toe of the boot) to examine how the cat recovered.

The sensation of stumbling, the researchers detail in the medical journal eNeuro, triggers reflexes that ensure the other three paws stay in contact with the ground, preventing the animal from falling while the fourth paw hovers over the obstacle.

"It's really a coordinated response in all four limbs," explained Frigon. "These are responses that will also be described in humans, and this will allow us to see how these adjustments are made after different types of spinal cord injury."

Such spinal cord injuries, he continues, frequently present balance and coordination problems; their walking is often "non-functional," and even those who have recovered very well may be unable to avoid an obstacle or have difficulty making a turn.

The reflex that prevents us from falling when we stumble is extremely fast. But as we age, nerve signals travel more slowly, muscle responses are slower to come, and the risk of falling increases in seniors who are unable to adjust quickly.

Such work could one day lead, for example, to the development of electrical stimulation of the spinal cord to facilitate somatosensory feedback, and, thus, walking.

"By providing better understandings of how the system works, we will be able to develop more targeted and perhaps even completely new strategies to promote recovery of walking, but especially of functional walking, not just being able to put one foot in front of the other, but being able to respond to disturbances, avoid obstacles... to go for a hike," Frigon concluded.

This report by The Canadian Press was first published in French on Jan. 17, 2023.