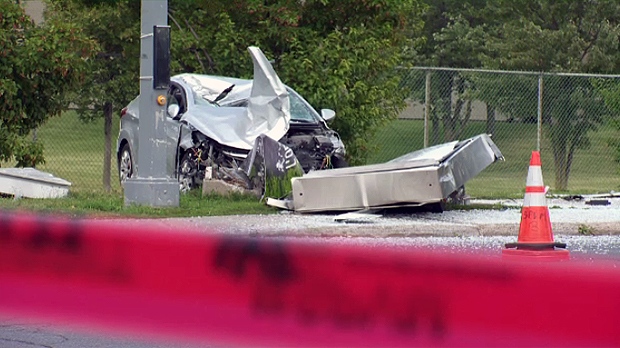 A car smashed into a bus shelter following a chain of vehicular collisions on Aug. 18, 2019

A 17-year-old girl suffered injuries to her head and lower body when a car struck the LaSalle bus shelter she was standing in on Sunday afternoon.

Police said that at around 1:00 p.m. a minibus was going north on Dollard Ave. and struck a car at the intersection of Dollard and de la Verendrye. Police said the minibus may have run a red light.

After the collision, the car struck a third vehicle before coming to a stop when it hit the bus shelter at Dollard and Salley.

The girl was taken to hospital but police said her life is not in danger.

The minibus driver, a woman of around 45-years-old and driver of the third vehicle, a man in his 50s, were not injured. The driver of the vehicle that struck the bus shelter, a woman around 70-years-old, was treated for nervous shock.

Police said there are no charges as of yet but the investigation is ongoing.