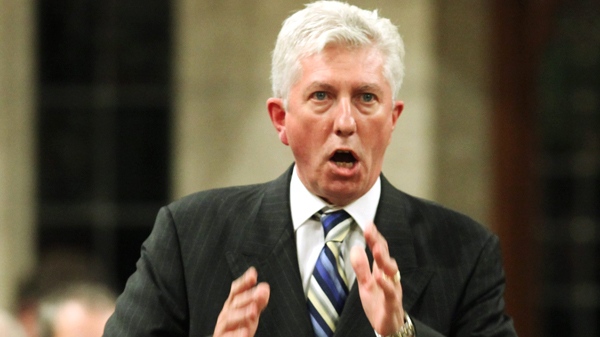 MONTREAL - Quebec's emotionally charged debate over multiculturalism has finally landed on the national stage and it centres on a ceremonial dagger worn by Sikhs.

Members of the federal Parliament now face a demand to ban the kirpan - which is worn at all times by at least one Ontario MP.

The discussion is being spurred by the Bloc Quebecois, which promised Wednesday to take up the issue with the House of Commons' all-party decision-making body. The initiative appeared to have little chance of success, because the board operates on consensus and the NDP described the Bloc move as shameful.

That Bloc announcement came one day after a headline-grabbing move by security guards at the National Assembly to deny entry to four Sikhs because some were carrying kirpans.

The incident became a flashpoint in the province's so-called "reasonable-accommodations'' debate, an ongoing discussion about where to draw the line on minority rights.

That issue has already been the topic, in Quebec, of impassioned public hearings that led to the government tabling legislation.

Bill 94 would deny government services to Muslim women wearing face-coverings, but the Pequiste opposition wants it to go further and regulate kirpans.

Some commentators in English Canada expressed bafflement over this week's incident at the Quebec legislature. But commentary in the province has been almost universally positive - with some flashes of annoyance at the complaints from English Canada.

The Bloc Quebecois wasted no time taking up the issue. The party released a statement applauding the previous day's move and announcing it would push the matter in Ottawa.

"It was a well-founded decision (in Quebec) and it is perhaps time that Parliament adopt similar rules,'' the Bloc's whip, Claude DeBellefeuille, said in a statement.

"It's not a debate about religious symbols or a social debate above and beyond that,'' she later told The Canadian Press. "It is really a security question and we have to look again at our practices.''

The issue hits close to home for one Liberal MP who wears the kirpan in the lower chamber. Navdeep Bains accused the Bloc of seeking to make cheap political gains from the controversy.

"I think it's fear-mongering at its best,'' Bains said.

"There is no real reason to bring this issue up now. I've been wearing a kirpan since 2004 and they have never raised this as a cause of concern.''

The reaction from the Conservative party, however, was far more muted, with a spokesman for Multiculturalism Minister Jason Kenney saying questions on the security of the House of Commons should be handled by the sergeant-at-arms.

The NDP flat out rejected the Bloc proposal.

"There have been Sikh MPs in the House for years. This has never been an issue nor should it be.''

Aside from Bains, there are at least two other practising Sikhs in the Commons, though it's not clear whether the others ever wear kirpans.

As federal politicians cautiously sought to position themselves on the emerging debate, commentary was exercised in the media and in cyberspace Wednesday.

An editorial in one national newspaper accused the legislature of "failing to live up to its obligation'' to promote the widest possible participation in the democratic process. But the comments from readers were widely laudatory of the legislature's decision - with many heartily applauding the Bloc.

Mario Dumont, who once led the populist Action democratique du Quebec, said on a radio show that such editorials were yet another example of "Quebec-bashing'' from the rest of Canada.

One of the most popular bloggers in the province, La Presse's Patrick Lagace, accused the critics of unfairly tarring Quebecers as "bigots,'' "closed to other cultures,'' and "slightly backwards.''

This flare-up over the kirpan rehashes an issue that many thought settled in a 2006 Supreme Court decision.

The court ruled 8-0 that a total ban of the kirpan in a Quebec school violated the Canadian Charter of Rights and Freedoms because it infringed on religious freedoms.

However, in that same 2006 decision, the court also allowed school boards to impose some restrictions in the name of public safety.