MONTREAL -- After Quebec City's shocking murders on Halloween night, the province has announced it's putting $100 million into mental health programs for the coming year.

The funding will go to an array of public programs but will also help connect people with private psychotherapy, said Quebec junior health and social services minister Lionel Carmant in an announcement Monday.

"We're opening up [funding for] private services for psychology. Those people who need services will get them," said Carmant.

"There are too many people on the waiting lists."

On Halloween night, 24-year-old Carl Girouard allegedly went on a stabbing spree in the provincial capital with a katana sword, killing two and injuring five people.

The funding announcement was already in the works. It was originally planned for Nov. 12, as part of the finance minister's economic update, but after the attacks on Saturday night the province decided to release it early.

Of the total, $35 million will be used to directly fund mental health services. Of that, the province is setting aside $10 million for students aged 17 to 34 who are attending Quebec schools, either CEGEP or university.

Carmant said that teenagers' transition to adulthood is a particularly sensitive time when "there is a gap" -- when many mental health clients lose touch with treatment. A program is already in place to help with that, he said, as it keeps Quebec mental health clients within the same system from infancy until age 25.

Another $31.1 million will go towards improving mental health services "in health and social services establishments."

The province will spend $19 million creating specialized teams from a group of 380 workers "on the ground" to pay attention to vulnerable groups and to promote early intervention.

Finally, $10 million will go towards community mental health organizations, and nearly $5 million will be spent on the province's online suicide prevention strategy and its helpline, 1-866-APPELLE.

He also said that the Halloween attack was an "unpredictable" type of event that couldn't have been prevented, referring to the Dawson College and Polytechnique shootings were in the same category.

"Nothing could have stopped what happened this weekend," he said. "What we need to do is improve mental health services across the board, for everybody."

He also spoke of the need to "destigmatize" mental health problems.

"Most people with mental health problems do not commit crimes," Carmant said. "They're more likely to be bullied than anything else."

On Sunday, Quebec City Mayor Regis Labeaume called for a debate on mental health in the National Assembly.

"For us (Canadian city mayors), mental health issues are the biggest safety concerns in major Canadian cities for decades to come," said Labeaume in a news conference.

"We all agree on that. Inevitably, at some point, we will have to discuss it.”

Legault said his government hired 300 people to work in the field, and that more resources are needed.

"We need to do more," Legault said.

"We're no different than other countries. We see that everywhere in the world... We have to be careful. We have to find a balance between saving lives and quality of lives of citizens... Right now, the number of cases is too high in Quebec."

He added that it's important to remember that a very small percentage of people who turn violent and it's important not to instill fear in the population.

Those living in isolation, Legault said, are particularly at risk and the population needs to be aware of their struggles.

"We have to have a kind of follow up for people living alone," said Legault.

Mental health support in Quebec was in the news leading up to the killings Saturday night.

A recent survey found that Quebecers' mental health has only worsened during the COVID-19 pandemic.

The survey from Quebec psychologists showed that 86 per cent of their patients reported an increase in mental distress since the pandemic began. The survey showed 70 per cent as having depressive symptoms, and just over half have problems with concentration, memory and attention.

Opposition parties said it should be bigger, longer-term and more urgent in a chilling foreshadowing of Saturday night's attack.

Extra mental health supports have been made available for those affected by the attack in in Quebec's capital.

The province's public security minister, Genevieve Guilbault, said she has ensured that there are adequate services in place to help those who are grieving.

Labeaume said the incident is particularly difficult for the city, which has not yet healed from a mass shooting outside a mosque three years ago that left six men dead.

He urged residents to lean on one another for support in their grief.

"This horror that took place here is adding to a mental burden that was already very heavy in this pandemic period," Labeaume said Sunday.

"The City of Quebec will do all it can to make our citizens as safe as possible and help them get through, psychologically, the consequences of this event."

A publication ban protects the identities of those who were wounded, but officials say all five are expected to survive.

SISTER OF VICTIM IN MOURNING

The sister of a man who was killed in Saturday night's sword attack in Quebec City said his death is a huge loss.

Marie-Jo Duchesne said she'd spoken with her 56-year-old brother, Francois, just hours before he was killed in what police say was a deliberate attack targeting random strangers.

Duchesne, who lives in Paris, said her brother was her confidante and best friend, and was always there for her when she needed it.

She said his death has taken a terrible emotional toll.

She added the tight-knit family of five brothers and sisters has been keeping in touch by phone while she tries to figure out a way to get back to Quebec.

Girouard of Ste-Therese, north of Montreal, was arrested early Sunday morning and charged with two counts of first-degree murder and five of attempted murder. 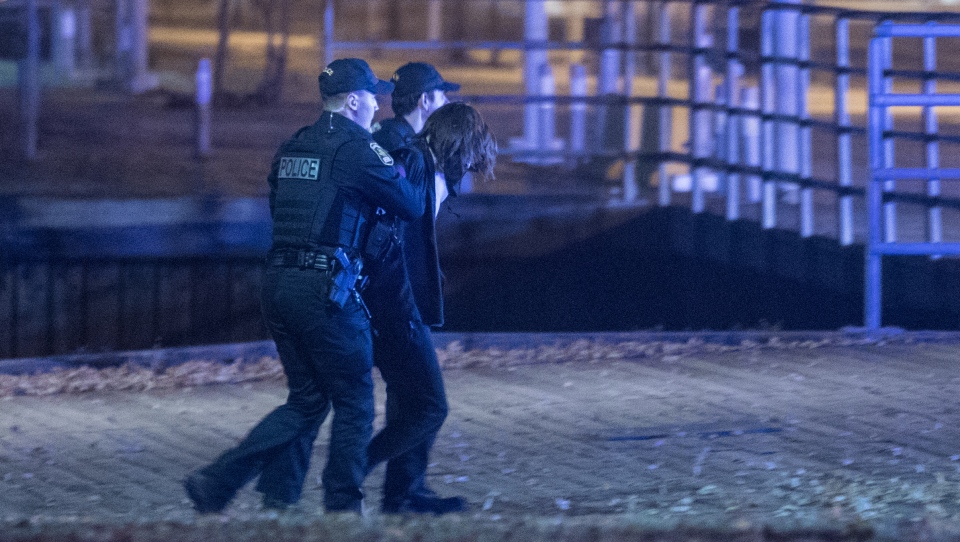 -- with reporting from The Canadian Press

'It's such a big loss': Sister says family in shock after brother killed in Quebec sword attack