Arctic seabirds have a low tolerance to heat, McGill study suggests: what this means in a rapidly-warming climate

MONTREAL -- A jet-black head with eyes to match, a tuxedo of black and white plumage — at first glance, the thick-billed murre might be mistaken for a penguin. But this chicken-sized seabird is a creature of its own, inhabiting the seas, skies, and shores of the arctic.

Like so many northern creatures, however, the murre is threatened by rising temperatures and shortened winters — and a new McGill study is helping uncover why.

More formally known as Uria Iomvia, the thick-billed murre has adapted over time to the freezing cold, equipped with a high metabolism and a diet of fatty fish. But these adaptations may be backfiring as a result of rising temperatures, according to the study.

“Murres are [...] poorly adapted for coping with warming temperatures, which is important as the Arctic continues to warm,” says Dr. Emily Choy, a postdoctoral Fellow in the Natural Resource Sciences Department at McGill University and the study’s lead author.

To observe the effects of increasing temperatures on arctic seabirds, Dr. Choy and a team of researchers travelled to northern Hudson Bay, where they scaled the cliffs of Coats Island, living in close proximity to a colony of 30,000 thick-billed murres.

Through their research, the team uncovered an alarming reality: the thick-billed murre, so accustomed to a frigid climate, displayed signs of heat stress at temperatures as low as 21 degrees Celsius.

Although the thick-billed murre is not currently considered an endangered species, these findings point to a precarious future — especially considering that temperatures in the arctic are rising faster than anywhere else on earth. 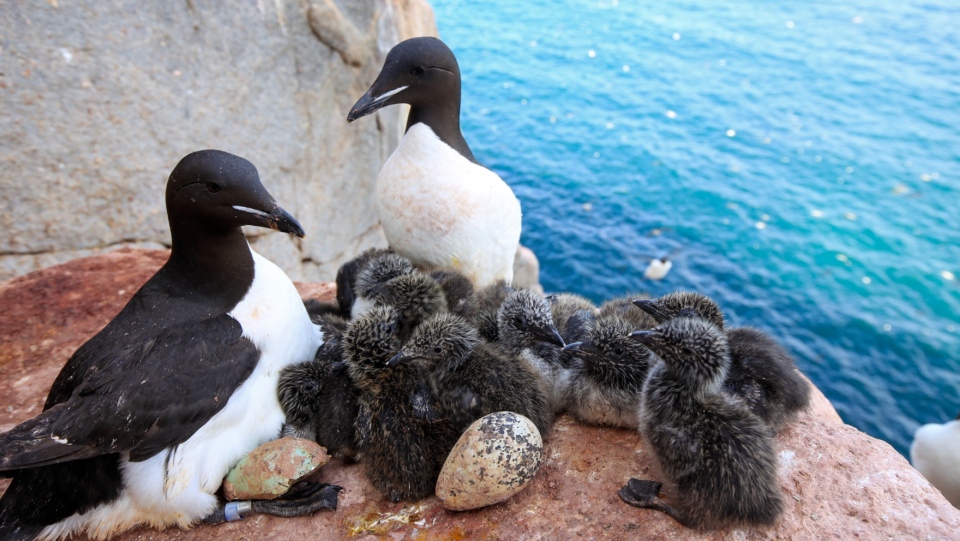 
TURNING UP THE HEAT

To gauge the thick-billed murre’s heat tolerance, researchers used “flow-through respirometry,” a technique which involves placing the murre inside a chamber and measuring its oxygen levels. The chamber is gradually heated from the outside and the murre’s physiological response is recorded, after which the murre is returned to its nest.

“It’s a bit like hot yoga for birds,” says Dr. Choy. “We used respirometry to basically measure their breathing rate, the amount of oxygen they were consuming, but also their evaporative water loss, the amount of water they were losing.” 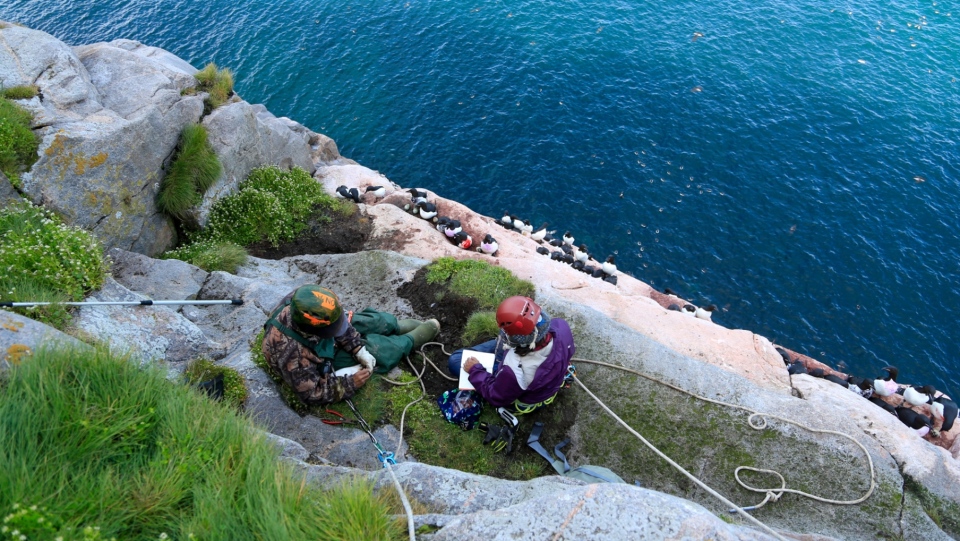 Dr. Emily Choy (right) and a colleague take notes above a cliff-side colony of thick-billed murres. Researchers were required to take a rock-climbing course in preparation for the study. (Douglas Noblet)

Through this technique, researchers concluded that murres have very little tolerance to rising temperatures. This is likely linked to their high energy demands, says Dr. Choy.

“Although they can dive up to 200 metres in a matter of minutes, they also spend four hours a day flying. And in birds, diving and flying are an energetic trade-off, [and it’s] very difficult to do both,” she says.

To tackle this challenge, the thick-billed murre has developed a speedy metabolism, allowing it to burn more energy and produce high levels of body heat.

“When the climate starts to warm, this is a big disadvantage in terms of trying to cool down,” says Dr. Choy.

Cooling off is especially difficult for the largest of the murres, the research suggests, some of which weigh up to one kilogram.

“Body size is believed to be an adaptation [to] living in the cold — you lose heat less easily. But it seems like, in terms of heat, that backfires.”

The female thick-billed murre produces one chick per breeding season, laying her egg on a cliff’s edge. There, she and her mate take turns nesting in day-long shifts. They rarely abandon their posts, even as temperatures spike.

“Murres have a very exposed nest, they nest in full sun,” explains Dr. Choy. “That makes them very vulnerable to heat.”

Over the years, thick-billed murres have been reported to overheat and die while nesting — and if one parent dies, the chick is unlikely to survive.

“Usually when one parent is incubating the nest, the other is foraging and bringing back food for the other parent or for the chick, so it’s nearly impossible to incubate and raise a chick with one parent.” To further complicate this issue, because thick-billed murres only lay one egg at a time, it may be difficult for the population to recover if it begins to dwindle.

“That’s why we have to be very careful in conserving the population and protecting them from stressors.”

A CANARY - OR MURRE - IN THE COAL MINE

With each passing decade, life on earth becomes hotter and hotter; just last month, an unprecedented heat wave took over parts of North America, with temperatures in Lytton, B.C. reaching a record-breaking 50 C. And while cold-adapted animals like the thick-billed murre are especially vulnerable to heat stress, they aren’t the only ones. With time, animals from warmer climates may be confronted with these issues too, says Choy.

“The arctic is considered an early-warning system for ecosystems in the south,” says Dr. Choy. “Thick-billed murres could be a canary in the coal mine [...] particularly in regards to the heatwaves birds have been experiencing in the pacific coast.”

“This is the first study to look at the impact of heat stress on arctic seabirds,” she adds. “I think what we’re finding is that heat stress is an understudied but important factor of climate change.”