Anti-corruption czar says inquiry should not be public 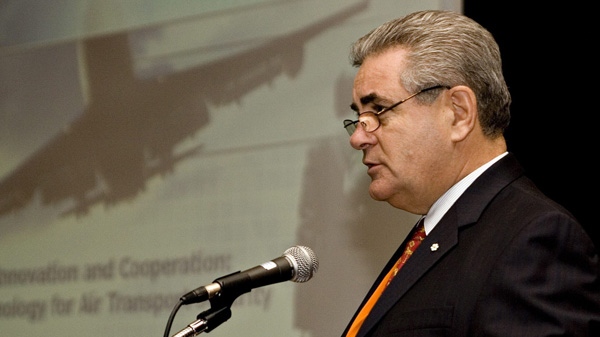 File photo of Jacques Duchesneau speaking to delegates at a convention on security Thursday Nov. 14, 2007 in Quebec City. (THE CANADIAN PRESS/Jacques Boissinot)

MONTREAL - The head of Quebec's anti-corruption unit says he would like to see an inquiry into collusion between organized crime and the construction industry, but he does not think that inquiry should take place in public.

During the show, he also said that a scathing 88-page report confirming links between organized crime, the construction industry, and political donations -- leaked to the media two weeks ago -- was based on interviews with more than 500 people.

Duchesneau said those people are ready to testify at an inquiry, but that, in his opinion, a panel of judges should oversee the investigation.

The former Montreal police chief also said that he has been the victim of intimidation on five separate occasions since being named head of the anti-corruption unit UPAC in February 2010.

The best-known of those incidents relates to Duchesneau's failed run to be mayor of Montreal in 1998.

Last November Gilles Prud'homme, one of Duchesneau's campaign managers, says that Duchesneau approached him in 1999 and asked if his name could be used on a $10,000 loan application for his "New Montreal" political party.

Prud'homme also said he later found that a second $10,000 loan application had been made using the address of a campaign organizer's brother and a false name.

Duchesneau stepped down until February 2011, when Quebec's Director-General of Elections said a three-month investigation and interviews with multiple people involved showed no signs of any improper loans taken on to finance a campaign.

Last week Duchesneau met with Transportation Minister Pierre Moreau, but did not say much about the meeting, except to point out that the Ministry will implement steps to eliminate corruption. Neither man said exactly what those steps will be.

On Tuesday he will testify for five hours before a parliamentary Committee on Public Administration in Quebec City.