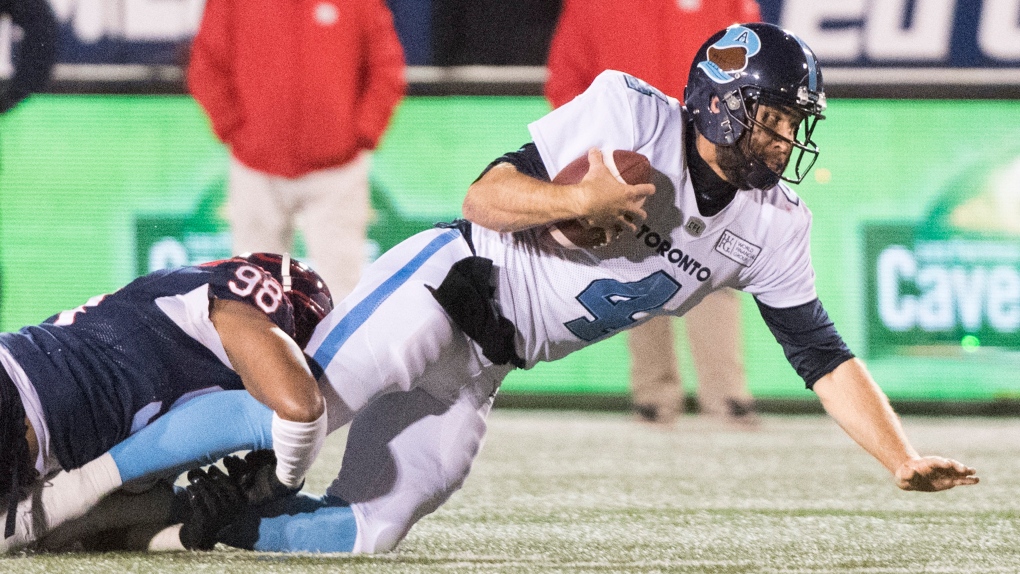 Adams threw 16 completions on 23 passing attempts for 249 yards along with his three scores for Montreal (9-8).

Als running back William Stanback reached the 1,000-yard plateau on the season, rushing for 11 carries and 49 yards in the game.

Montreal lost receiver DeVier Posey to a high thigh bruise during the second half.

McLeod Bethel-Thompson threw for 342 yards on 35 completions for Toronto (3-13). He added two TD passes and a rushing touchdown.

Montreal scored the game's first ten points. Following a 36-yard field goal from Boris Bede in the first quarter, Adams threw his touchdown pass of the night to Posey to give his team a 10-0 lead in the second quarter.

Toronto kicker Tyler Crapigna had a 41-yard field goal to make the score 10-3. But Bede restored his team's 10-point advantage with a 40-yard field goal of his own with a little over five minutes to play in the first half. Crapigna had his second kick blocked seconds before halftime, giving Montreal a 13-3 lead heading into the break.

Stanback reached over 1,000 rushing yards on the season in the third quarter, when he ran for five yards on his 11th carry of the night in the opening minutes of the second half.

The Argos, once again, cut into the Alouettes lead later in the quarter. Bethel-Thompson ran a quarterback sneak into the end zone, bringing the score to 13-10.

Then, with 3:04 left in the third quarter, ex-Alouette S.J. Green caught a touchdown pass from Bethel-Thompson to give the Argos the lead for the first time.

But with 10:26 to go in the fourth, Adams threw a screen pass to Johnson. The 32-year old weaved his way around defenders, leading to a 45-yard score and a three-point lead. Later in the quarter, Adams threw an 18-yard touchdown pass to Quan Bray to give Montreal a 10-point lead again.

The Argonauts would draw within three points with 1:14 to play as Bethel-Thompson threw his second touchdown pass of the night to Chandler Worthy. Crapigna attempted a game-tying field goal with two seconds left in the game, but his kick was well short of the uprights.

More than 17,000 fans were in attendance for Friday night's game. The Als' victory was their 300th home victory in franchise history.

This report by The Canadian Press was first published Oct. 18, 2019.