With latest snow-clearing underway in Montreal, another 15 cm is on the way this week 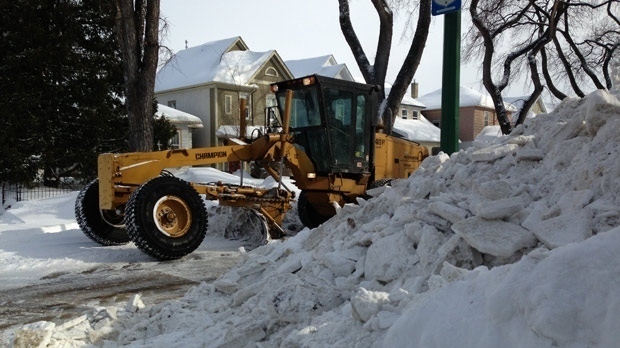 MONTREAL -- The city of Montreal kicked off its third snow-clearing operation of the season Monday night - and now comes word that another 15 cm of snow is on the way.

Environment Canada on Tuesday issued a special weather statement for the Montreal and Laval region, saying that a low-pressure system over Texas will be heading our way and intensifying, which is expected to bring another 15 cm in time for Thursday's morning rush hour.

"Areas south of a line from Montreal to Sherbrooke may see total snowfall amounts of up to 15 centimetres," according to the Environment Canada statement. "This snow could come with local blowing snow. Heavy snow may lead to deteriorating driving conditions during the Thursday morning rush hour in and around Montreal."

Some 11 cm of snow fell over the weekend, leading Montreal to kick off a snow-clearing operation Monday at 7 p.m.

Jean-Francois Parenteau, the Montreal executive committee member responsible for snow clearing, said that the city decided to start snow clearing even though there wasn't a huge amount of precipitation, saying the snow that fell was heavy and compacted, and could become difficult to remove if left unattended for too long in freezing temperatures.

3 rounds of #snow this week:

Round 1: tonight, 2-4cm
Round 2: Wed PM into Thurs AM, 5-10cm @environmentca has issued special weather statements for the Thurs AM drive. Could see blowing snow.
Round 3: Sat->Sun, 10-15cm possible@CTVMontreal pic.twitter.com/3oqed9zO8w