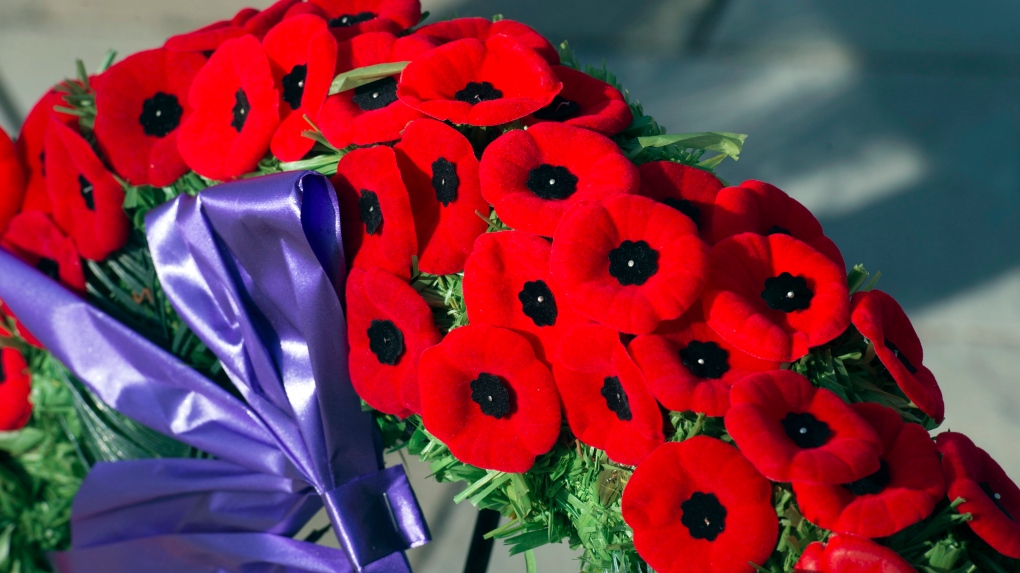 Poppies are pinned to a wreath during Remembrance Day ceremonies at the garrison, Tuesday, November 11, 2014 in Saint Jean-sur-Richilieu, Que..THE CANADIAN PRESS/Ryan Remiorz

MONTREAL -- With many of the veterans who volunteer in the annual poppy campaign sidelined because of the COVID-19 pandemic, the Royal Canadian Legion in Westmount has taken things online this year.

With the risks associated with the pandemic, many Legion volunteers, who in Quebec are on average 75-years-old, have been advised to stay home this year, instead of going out to pass poppies in exchange for donations ahead of Remembrance Day.

“It’s very difficult to tell some of these very determined senior veterans that they can’t come out because they’ve never been able to not do something before,” said Colin Robinson, Honorary Colonel with the Royal Montreal Regiment. “They like to participate. It’s one of the highlights of their year.”

There’s also been the added challenge this year of setting up in malls and other places, while respecting all public health guidelines.

For these reasons, the Legion launched a Poppy by Mail campaign this week.

Robinson said between the pandemic, and the fact there was no major international deployment this year, he expected the demand for poppies to take a bit of a hit.

But that hasn’t been the case.

“It’s absolutely overwhelming,” he said. “The place that we are set up at the Metro grocery store at Victoria and Sherbrooke in Westmount we’ve had lineups.”

That could be because the armed forces ran one of the largest operations in its history here at home in 2020, with members deployed in embattled CHSLDs at the height of the first wave of the COVID-19 pandemic.

Robinson says he’s seen the demand for poppies increase exponentially in the last 15 years, especially since the winding down of the war in Afghanistan.

“Canadians still want to remember. I think the poppy is one of the most powerful cultural icons that Canadians have, it’s something that resonates and we’re seeing it across all age groups,” he said.

The legion is accepting donations online at poppybymail.ca.