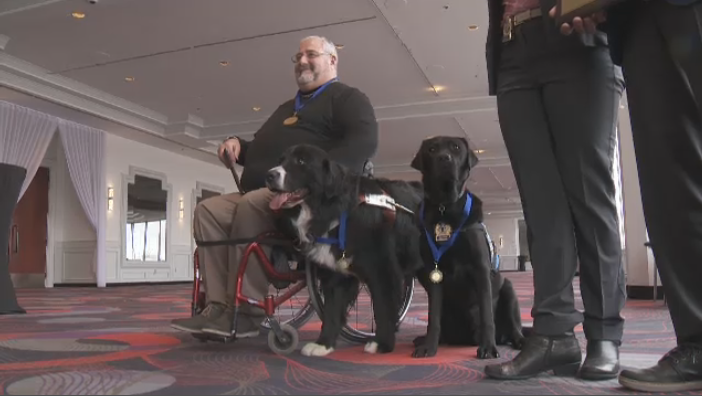 Bouffon (Left), a Labernese mix, and Kanak (Right), a black lab, received accolades and medals Sunday for their service and contributions to society. (CTV Montreal)

There’s one lesson to be learned from Sunday’s awards ceremony: heroes don’t always walk on two legs – or wear capes.

On Sunday, two of the province’s best “good boys” were inducted into Quebec's Animal Hall of Fame, in celebration of their contributions to society.

Kanak, a black lab, and Bouffon, a 3-year-old lab mix, are by all accounts, unlikely heroes. But each has made a difference – Kanak as a “professional” police dog, and Bouffon, a “hero” who saved his master’s life.

Bouffon is a MIRA-trained service dog. His owner, Jacques Millette, is deaf, cannot speak, and uses a wheelchair to mobilize.

Last October, Millette was working on a project in his basement when a blowtorch he was using slipped from his hands and set fire to the room.

The blaze spread quickly, and Millette struggled to control it – falling from his wheelchair in the process. But with one arm, Millette managed to grab hold of Bouffon’s fur and was dragged to safety in the building’s elevator.

“Bouffon came to see him, to find out what was going on. If it wouldn’t have been for Bouffon, Mr. Millette wouldn’t be with us today,” explained Jean Gauvin, President of the Small Animal Veterinary Association.

“It’s so important to celebrate this, because we want to spread the good news,” he said.

Also important to highlight, according to Gauvin, is how service animals can facilitate police investigations by doing what’s natural to them – providing comfort.

Kanak is a professional dog who works with Sherbrooke Police to help put victims of domestic and sexual abuse at ease – Quebec’s first service police dog.

He’s previously received two provincial awards, and has inspired other Quebec police forces to consider the benefits of employing a “comfort care” animal.

“He really helps the police force have a better communication with kids and the elderly,” Gauvin said.

“You go up, you’re in uniform, and you try to explain something – but very frequently [victims] are afraid of the authorities. But when they go with Kanak, it changes the situation completely,” he added.