Trudeau wants to empower backbenchers his dad once dubbed 'nobodies' 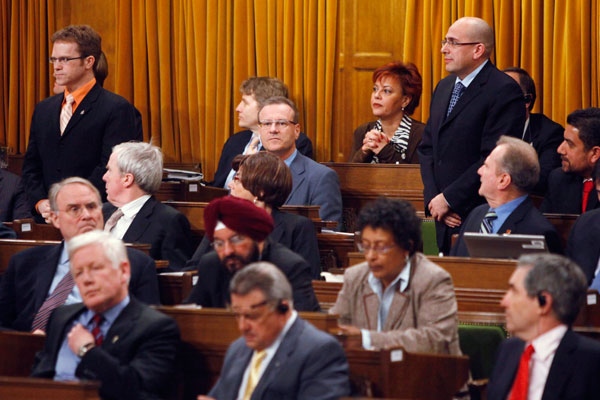 Newfoundland Liberal Members of Parliament Scott Simms (left) and Todd Russell vote against party lines against the federal budget, in the House of Commons on Tuesday Feb 3, 2009. (Tom Hanson / THE CANADIAN PRESS)

The Liberal leadership front-runner is proposing a series of democratic reforms aimed at turning MPs into somebodies--more independent, more powerful and more in tune with the constituents who elected them.

Should he become prime minister, Trudeau told The Canadian Press he'd relax party discipline in Parliament, giving government backbenchers the freedom to vote as they see fit on all but three categories of bills.

They would be required to support the government only on budget or money bills, legislation to implement the 2015 election platform on which they'd have been elected, and bills involving fundamental charter rights.

While he'd empower MPs once they make it to Parliament Hill, he'd force them to fight open nominations for the right to carry the Liberal banner in elections. There'd be no more nomination protection for incumbents or appointment of candidates in unheld ridings.

Trudeau's proposals are not fully detailed yet. Early next week, he intends to ask Canadians through his Facebook page to participate in improving and/or adding to his reform agenda.

The objective, however, is clear: to force politicians and parties to "start trusting Canadians again."

"We don't govern like we actually trust Canadians to be able to make intelligent, informed decisions...and since we treat people with such low expectations and disdain, they respond with cynicism and disengagement."

His eldest son said the put down was actually aimed at the "self-importance" of some MPs, rather than dismissing them all as irrelevant.

Still, Trudeau acknowledged his proposals are "moving in the opposite direction" of his father's assessment, aimed at reversing the perception of MPs as little more than parrots of government talking points.

His own experience in the Montreal riding of Papineau convinced him of the need to end the Liberal practice, instituted in 1992, of allowing the leader to appoint candidates in some ridings and to protect incumbents from nomination challenges.

"I had to fight a really tough nomination (in 2008), where I wasn't the candidate that the party wanted to win," Trudeau said.

Forcing open nominations across the board would similarly help "every single riding" in the country to develop ground organizations and support bases, he maintained -- a crucial first step for a party trying to find its way out of the political wilderness.

Former Liberal prime minister Paul Martin also tried to empower backbenchers but his efforts often resulted in the appearance of division in Liberal ranks, much to the delight of rival parties.

"It could be terribly frustrating," Trudeau acknowledged.

"Of course, there are going to be kinks in this. This is a whole new way of ... using Parliament in a way that's more transparent, more accountable, more connected with Canadians, with constituents."