Think you hate the cold? Meet the Montreal girl who's 'allergic' to it

Eryn Margolese’s routine before going outside this time of year would sound familiar to a lot of Montrealers.

“Depending on how cold it is, I'll wear two pairs of pants,” says the 15-year-old. “And I'll always wear, like, long sleeves, jackets, hat, gloves, scarves—everything.”

Nobody likes to be cold. But for Margolese, it’s not quite the same thing.

In 2020, she started getting a strange rash at odd times: raised, itchy red bumps on her skin that could take hours to go away. She tried to ignore it.

“I didn’t really know what was happening,” she said. “I just had some rash, and I was like ‘OK, that’s weird,’ and then it kept happening and I had no idea what it was.”

Finally, she went to “a bunch of doctors” and they tried to help. Maybe it was a kind of soap or laundry detergent she was reacting to, they theorized. But she hadn’t been using any new products.

Finally, an allergist at the Montreal Children’s Hospital had a new idea.

Dr. Moshe Ben-Shoshan took an ice cube and put it on Margolese’s arm. The rash quickly appeared, and he knew exactly what the problem was.

In such “ice cube tests,” he explained, “we wait five minutes and then we observe the development of hives aftewards.”

Margolese had come with a story he recognized, he said—“a classic story of going swimming or going outside in cold weather and developing hives.”

He broke the news to her: she was allergic to chilly temperatures, more or less, with a condition called cold urticaria. It’s not exactly an allergy, but a reaction to cold that looks a lot like an allergy and can even produce life-threatening anaphylaxis.

It affects about 30,000 Canadians, most of them young people, Ben-Shoshan told CTV News.

“Any one of us will get redness where we put the ice cube, but this patient will get hives,” he said.

“It looks like an allergy because you get the hives. But the trigger is not an allergen like peanut or… pollen,” he said.

“Basically the exposure to cold is assumed to generate an auto-allergen, so a substance that your immune system reacts to.”

Doctors are still trying to understand the condition, but it’s the substance produced within the sufferers’ bodies that creates the skin reaction.

“When you think about an allergy, you try to look for an external trigger that you can remove from your environment, like you know, a food… or a cat or a dog,” the doctor explained.

“This is different," he said. "In order to control it you need to control your internal environment by keeping your temperature warmer, by protecting your exposed surface areas, by taking antihistamines and in cases that are more severe,” having an epinephren injector. 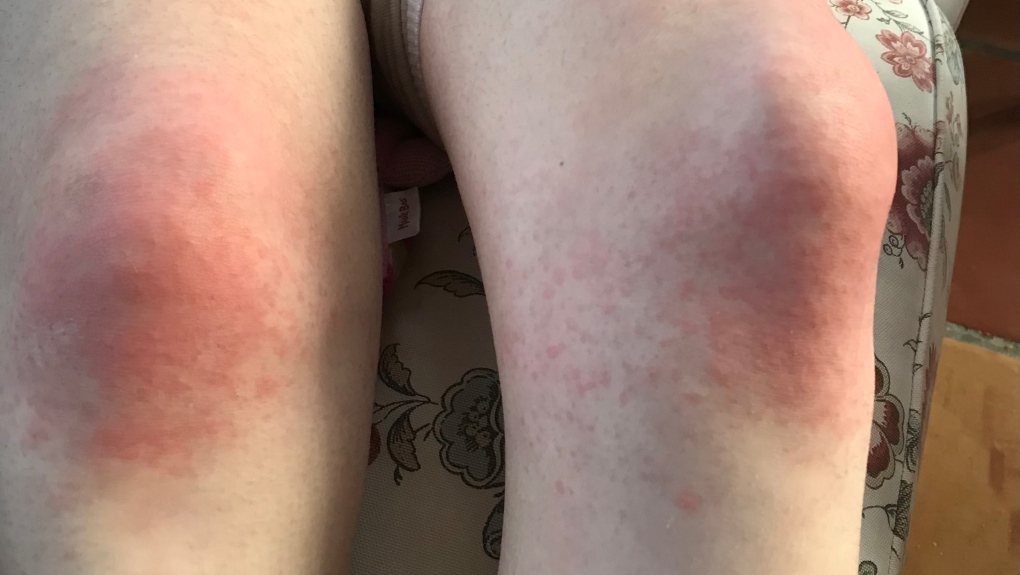 For Margolese, the news was hard to hear. One of her main triggers wasn’t winter weather, but being at summer camp and swimming or boating every day in a cold lake, which she loved.

Now, she can’t do that the same way. She has to wade slowly in and pay attention to her reactions, Ben-Shoshan said—jumping in is not an option.

Anaphylaxis is rare in people with cold urticaria, with a review of 10 years of research showing it can happen in about 20 per cent of patients. But when such a severe reaction happens, it’s usually from quickly plunging into cold water or other very sudden temperature changes.

“I'll sometimes walk my dog, but it'll be a much shorter walk and I'll go outside less,” she said.

Other things are surprising. She can eat cold treats like ice cream, but can’t necessarily hold onto a cold drink for a long time without protecting the skin on her hands.

The Montreal Children’s Hospital said in a release that the disorder affects girls slightly more commonly than boys.

Ben-Shoshan said the condition is more common in northern latitudes, including in Canada. It can last for a long time, often 10 years or more, and while for some people it goes away, for others it can last for life.

Margolese says that now that she’s had some time to live with the new precautions, she’s “used to it,” though not happy about having to give up cold pools and lakes.

And in winter, if Margolese’s family used to have to remind her, like many teens, to wear gloves or zip up her jacket, those days are long gone.

“I was never too cautious in the cold. It was kind of like if I'm walking from my house to my car, it's like whatever… having gloves is not a big issue,” she said.

Nearly 20 officers were in a hallway outside of the classrooms at a Texas elementary school for more than 45 minutes before agents used a master key to open a door and confront a gunman, authorities said Friday.

Amid protests, NRA meets in Texas after school massacre

New federal firearms bill will be introduced on Monday: Lametti

Federal Public Safety Minister Marco Mendicino will table new firearms legislation on Monday, according to his colleague Justice Minister David Lametti. In an interview with CTV's Question Period that will air on Sunday, Lametti pointed to the advance notice given to the House of Commons, and confirmed the plan is to see the new bill unveiled shortly after MPs return to the Commons on May 30.

NEW | 'Died of a broken heart': Can it really happen?

Takotsubo cardiomyopathy, more commonly known as 'broken heart syndrome' or stress-induced cardiomyopathy, is an actual medical condition triggered by severe emotional or physical stress and is different from a heart attack.

Johnny Depp's lawyers ask jury to give actor 'his life back'

Johnny Depp's lawyers asked a jury Friday 'to give Mr. Depp his life back' by finding that his ex-wife, Amber Heard, committed libel.

'I don't deserve this': Amber Heard responds to online hate

As Johnny Depp's high-profile libel lawsuit against ex-wife Amber Heard wound down, Heard took her final opportunity on the stand to comment on the hate and backlash she’s endured online during the trial.

Monkeypox in Canada: Act now to stop it, expert urges, before it's too late

With 26 cases of monkeypox now confirmed in Canada, health officials warn that number will likely grow in the coming days and weeks. However, one expert says the outbreak can be stopped if the country works quickly to get it under control.