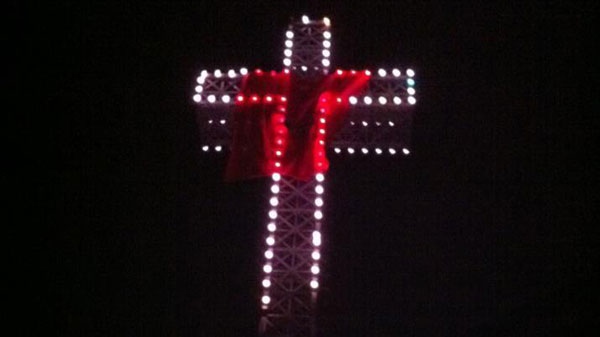 MONTREAL - With up to 30,000 students ready to start striking in the city below, a group of students draped a red flag over the cross on Mount Royal early Monday morning.

Removed by authorities before 9:00 a.m. no student group has taken responsibility for the stunt.

The Federation etudiante collegiale du Quebec claims that they have no idea who put the banner on the cross. According to Charlotte Watson, in charge of communications for the FECQ, the banner was put up by a group of students but she says they weren't associated with their federation.

Same thing with the Federation etudiante universitaire du Quebec where spokesperson Mathieu Leblanc says the action wasn't organized by them.

The stunt came after CEGEP student leaders from across Quebec camped out at College Montmorency in Laval this weekend to plan strike action against rising tuition fees.

The fight against tuition increases has already seen arrests and violence. A student protest turned violent last spring, leading to arrests and the use of stun grenades. On Thursday, 37 students were arrested after a protest at CEGEP du Vieux Montreal spun out of control.

An increase of $325 per year for five years is expected to be included in the next provincial budget, due in March. With the increases factored in, full-time students will pay $3,793 per year for tuition by 2017. Additional fees are expected to push that number closer to $5,000 annually.

The current average annual tuition in Quebec is $2,415.