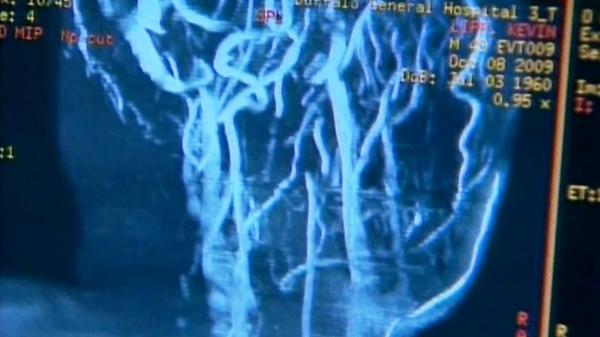 A scan shows the veins in the neck that are involved in the 'Liberation Treatment' for MS.

A call for a national trial of a controversial M-S treatment has gained support.

Quebec Health Minister Yves Bolduc says the province would be willing to join a national clinical trial of the so-called liberation procedure.

The treatment is based on an unproven theory that blocked veins in the neck or spinal cord are to blame for M-S, a chronic disease of the nervous system.

Bolduc says it's a method that shows promise but notes there are no clinical studies to show how efficient it is.

But he's willing to investigate it, along with the other provinces.

Manitoba Health Minister Theresa Oswald has called for a national trial of the procedure.

The M-S community is divided on the issue, with many saying more studies are needed before the treatment can be tested on humans.