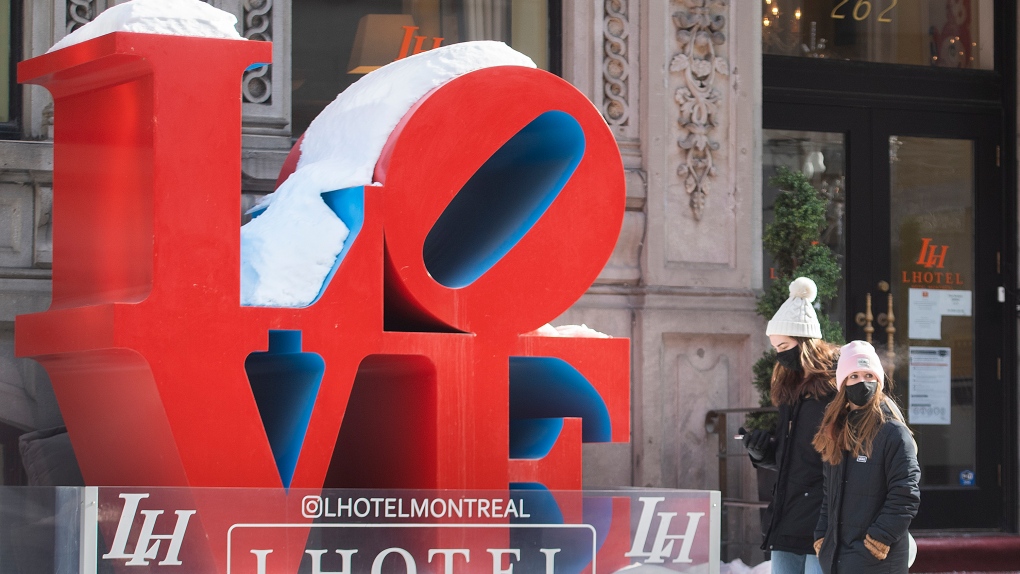 People wear face masks as they walk by the word LOVE outside a hotel in Montreal, Saturday, February 13, 2021, as the COVID-19 pandemic continues in Canada and around the world. THE CANADIAN PRESS/Graham Hughes

MONTREAL -- Quebec COVID-19 hospitalization numbers dropped for the sixth straight day on Sunday and fell to its lowest point since Dec. 5 when there were 778 COVID-19 patients in the province.

On Sunday, the province reported that seven fewer people were receiving care in Quebec hospitals for COVID-19, and the total number of hospitalizations is now 805. Of those, 132 people are in the intensive care ward, an increase of two.

Officials reported 910 more people have tested positive for COVID-19 in the past 24 hours in Quebec bringing the total number of infections in the province to 276,790 since the start of the pandemic.

The province adds that 1,124 more people have recovered from the novel coronavirus bringing that total to 256,270.

The number is below the seven-day average for daily cases which is now 962 cases per day.

The Quebec Institute of Public Health says that there are 10,306 active COVID-19 cases in the province, which is 227 fewer than on Saturday.

As of Sunday, 10,214 people have died due to the coronavirus in Quebec since the start of the pandemic, an increase of 13 after two were removed from the overall total due to an investigation finding that the cause of death was not attributable to COVID-19.

The total number of vaccinations administered in Quebec is now 293,944.

On Feb. 12, 28,404 samples were analyzed. (Quebec releases its vaccination data from one day prior and its sample testing data from two days prior to its daily updates).

One death was added to the total in Chaudiere-Appalaches (281 total).