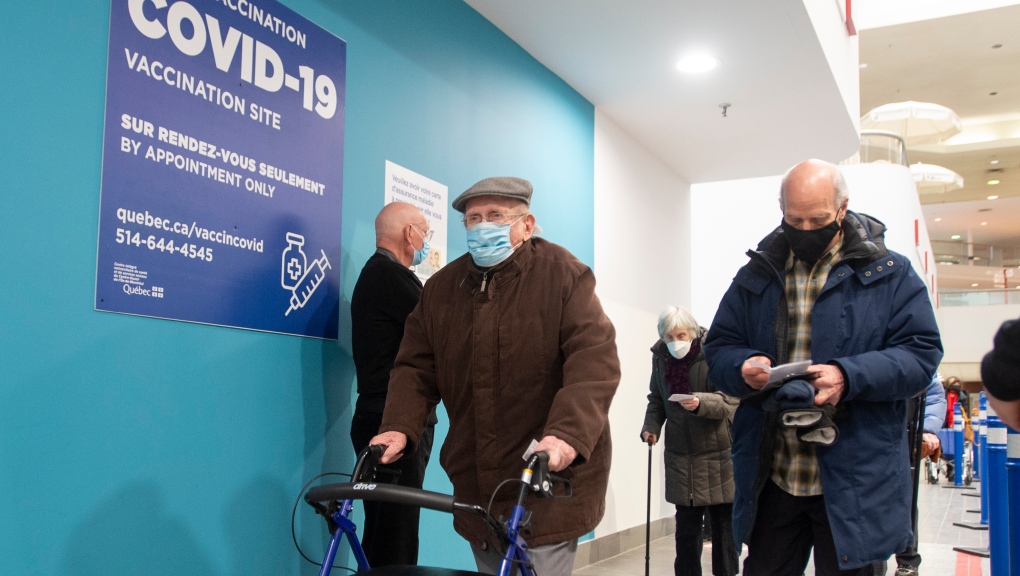 Seniors arrive for their shots at a COVID-19 vaccination clinic in Montreal, Friday, March 5, 2021. Vaccinations in Quebec have surpassed 500,000. THE CANADIAN PRESS/Ryan Remiorz

MONTREAL -- Quebec announced Saturday that 749 more people have tested positive for COVID-19 in the past 24 hours bringing the total number of cases to 291,924 since the start of the pandemic.

The seven-day average for daily case increases is now 703, and the Quebec Institute of Public Health is reporting that there are 7,214 active cases in the province, a decrease of 76 from Friday.

In addition, the province added 10 new deaths due to the disease to the overall total including four in the past 24 hours, four between Feb. 27 and March 4, and two before Feb. 27.

Since the start of the pandemic, Quebec has recorded 10,465 deaths due to the novel coronavirus.

Hospitalizations dropped for a second day on Saturday with Quebec reporting that 16 fewer patients are receiving care in the province's hospitals for a total of 601 hospitalizations. Of those, 109 people are in the intensive care ward, a decrease of two.

On March 4, health-care professionals analyzed 29,109 samples. (Quebec releases its testing data from two days prior to its daily updates).

One death was reported in Quebec City (991 total), and the Eastern Townships (306 total).