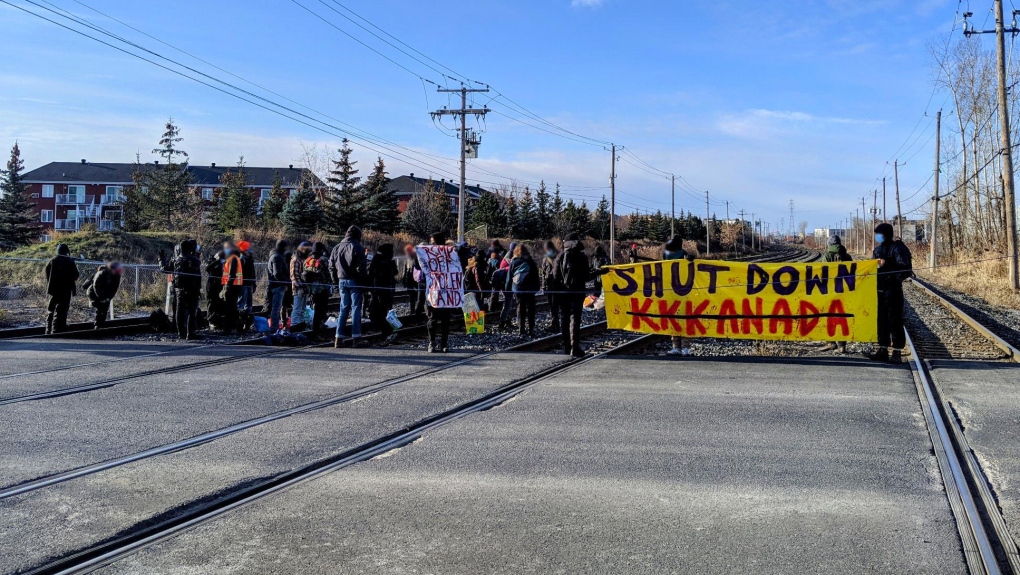 MONTREAL -- Quebec protestors erected a blockade Saturday morning across a strip of Canadian National (CN) rail south of Montreal in solidarity with Wet’suwet’en hereditary chiefs in the midst of an ongoing standoff with the RCMP and a major oil and gas company in B.C.

The protestors described themselves in a Saturday press release as non-Indigenous "settler allies who stand in solidarity with Indigenous peoples who are defending their territories from colonial violence and industrial destruction."

The protest began at 9:30 a.m. in Saint-Lambert, Que., a city on Montreal's South Shore. It was one of several protest actions in recent weeks -- a trend which will continue "for as long as the RCMP remains on the territory of the Wet’suwet’en and the construction of the Coastal GasLink pipeline continues” said one of the blockade participants, Marianne Côté, in the release.

CTV reached Côté while she was still on the tracks. She says spirits were high as the protest grew to a group of around 60 people. Signage and debris had been placed on the tracks, and a metal drum had been fashioned into a make-shift fireplace.

She said protesters saw several trains approach the blockade, stop, and hit reverse. CN said in a statement it was aware of the blockade, but did not specify whether it was disrupting service.

The Wet'suwet’en hereditary chiefs, who are the traditional leaders of the territory are standing in opposition of a pipeline being built by Coastal Gaslink, despite it being approved by the elected council. In November, Mounties in northern B.C. said they were enforcing an injunction barring protests from blocking an access road used by Coastal GasLink pipeline workers. Several people were arrested, including two journalists.

St-Lambert blockade is initiated by anti-colonial settlers in solidarity with Indigenous peoples defending their territories against colonial violence and destruction. Enviro movements must support Indigenous struggles for land and sovereignty! #ShutDownCanada #AllOutForWedzinKwa pic.twitter.com/KfXbudxBQ7