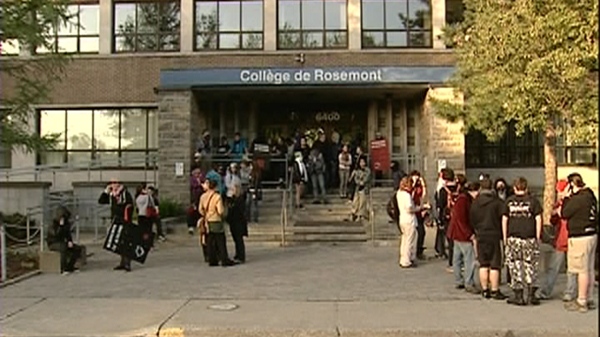 MONTREAL - Protests outside a CEGEP have once again convinced administrators to cancel classes for the day, despite the presence of police and numerous students who want to go to school.

Last week several student went to court to ask for an injunction preventing protesters from interfering with classes at College de Rosemont.

That was granted, but didn't stop several hundred anti-tuition-hike protesters who assembled early Monday morning outside the school.

Dozens of police officers were on hand, and several security guards were inside the school as well.

Several students who wanted to attend classes tried to make their way inside the building, but were refused entry by protesters.

There are reports that security guards inside the school also told students they were not allowed inside.

Around 7:45 a.m. there was a scuffle at one of the doorways and police intervened. There are reports, as yet unconfirmed by police, that pepper spray was used.

Soon after an ambulance arrived to treat one person who had suffered what seems to be a head injury.

According to a union that represents CEGEP teachers in Quebec the school's administrators cancelled classes for the day after the incident.

After classes were cancelled, several hundred demonstrators marched north along nearby St. Michel Blvd., blocking traffic until they stopped to rally in the parking lot and street in front of 7950 St. Michel Blvd.

A similar scene unfolded at College Edouard Montpetit in Longueuil.

Despite an injunction ordering protesters to stand clear, they did not, and as a result the administration of that school cancelled classes for the day, saying it could not guarantee the safety of individuals or the building.

Also in Longueuil, the University of Sherbrooke campus on Charles-Lemoyne was blocked by 200 protesters who had marched to the school from the metro.

Around 10:30 a.m. the protest turned violent, and riot police dispersed the crowd with pepper spray.

At College Lionel Groulx in Ste. Therese the administration chose to support students who want to be in class.

When 150 masked protesters blocked the doors to the building Monday morning, the school said it would be filing a complaint in court.

In Gatineau classes finally resumed, after students voted on Friday to call an end to their months-long boycott.

Montrealers can expect to encounter more anti-tuition-hike protests throughout the week.

On Monday the student group CLASSE is aiming to create "economic disruption" in the city's financial district with a protest slated to begin at Place Jean-Paul Riopelle.

Another protest is planned to take place outside city hall at 4 p.m. to denounce an as-yet-unpassed bylaw banning masked protesters.

Meanwhile at the courthouse, the student group Force Etudiante Critique says it will assemble en masse at 11:30 a.m. to hold a vigil supporting the four people charged with committing a hoax regarding terrorist activity, conspiracy and mischief over $5,000, following last Thursday's smoke bomb attacks in the metro system.

Montreal's underground public transit system was closed for two hours while the smoke was cleared and police investigated for threats to public safety.

Four people identified as suspects surrendered to police on Friday and were arraigned Saturday in court.

François-Vivier Gagnon, Genevieve Vaillancourt, Vanessa L'ecuyer and Roxanne Belisle were scheduled to enter pleas in court, but their cases were postponed until May 23, 2012.