The battle over religious symbols, veils, and other garments is once again brewing in Quebec City.

This time the brouhaha is, once again, over the chador -- a cloak that covers everything but a woman's face.

It gained prominence in Iran after the revolution of the late 1970s, where until then it had typically only been worn during mourning.

The Coalition Avenir Quebec has been promoting itself as the party of Quebec values in recent weeks, and fresh off an opinion poll showing the party was gaining support, CAQ immigration critic Nathalie Roy took a swipe at the Parti Quebecois's new leader.

"I just want to remind you that Mr. Lisée is the same guy who said that women were carrying bombs and AK 47s under their burqas. That was ridiculous," said Roy.

One hour later the CAQ posted an ad  featuring a muslim woman wearing a chador, saying the premier and the leader of the opposition support teachers wearing the garment. 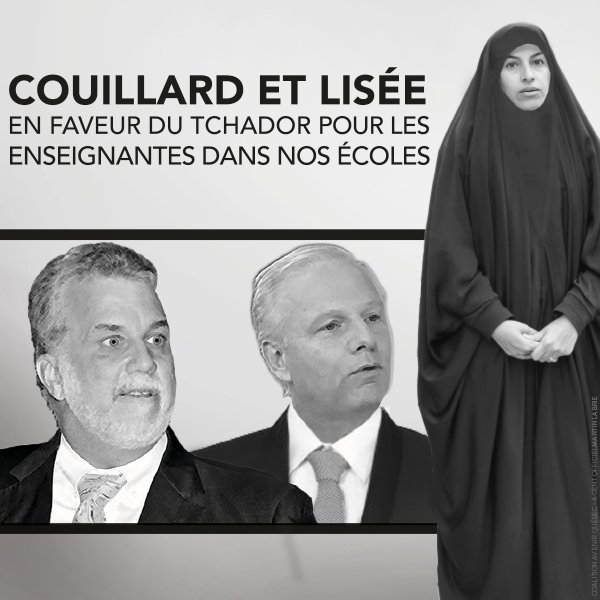 The ad was swiftly condemned by Jean-Marc Fournier, the house leader for the governing Liberal party.

"Why is he making that kind of partisan politics, opposing people one against the other? It's cheap politics," said Fournier.

"I really object so fervently to this approach, talking about identity politics," Weil said.

A little later the PQ unveiled its new approach to reasonable accommodation, with Lisée saying his party also wants to ban the chador.

"We've been exempt in Quebec from this kind of American-style willful lying in political ads, until today," said Lisée.

The Parti Quebecois was the party that unveiled its Charter of Values, with a proposed ban on religious symbols among authority figures, less than four years ago.

Lisée, who at times both supported and opposed the religious restrictions, said he would be willing to impose new rules on new employees if the PQ became Quebec's government.

"For new hires, the dress code will be no political, social or religious signs," said Lisée. "Existing teachers have the right that they've had for their whole career."

If elected in 2018, the PQ would also call for a debate on wearing burqas and niqabs in public spaces.

"Someone has said that the chador itself is a symbol of oppresion on women. That person is Premier Philippe Couillard - last year. I think he was right then. He changed his mind now," said Lisée.

The PQ said it was also in agreement with a recommendation from the Bouchard Taylor commission that judges, prison guards, and police officers should not be allowed to wear religious symbols while working.

According to research by the Environics Institute, about three percent of the approximately 57,000 Muslim women in Quebec wear a chador.