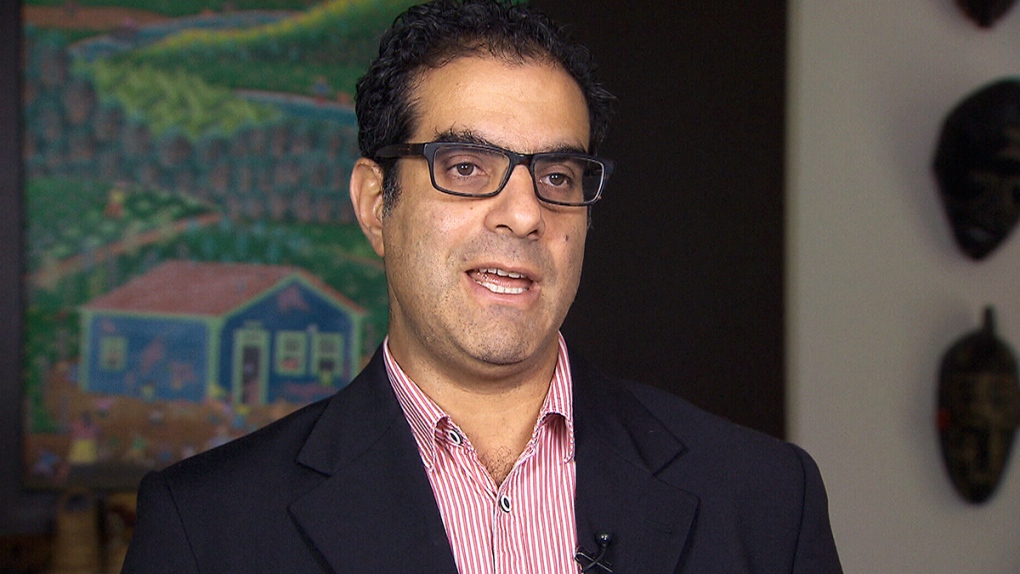 Amir Attaran, a University of Ottawa professor who has drawn the ire of Quebec politicians over his criticism of the province, has been suspended by Twitter in what he says is an overreaction to a turn of phrase.

"Health Canada knew half a year ago this was coming," he wrote.

He was responding to a controversy on Tuesday, also on Twitter, in which a comment by Health Canada suggested it could take months, not weeks, to approve a vaccine for children (which the agency later retracted, saying it will take only weeks).

Attaran's account was suspended by Wednesday midday, which he told CTV he finds silly.

"This happened because I pressured the Trudeau government to accelerate the approval of the vaccine for 5-11 year old children," he said.

"Obviously this time Twitter made a foolish mistake, since 'tarring and feathering' a politician is a figure of speech, and not a literal threat to assault him."

He had somewhere upwards of 10,000 followers on the platform, he said.

In the notification Twitter sent him, provided to CTV, the company said the suspension was permanent.

"Your account has been suspended and will not be restored because it was found to be violating... the Twitter Rules against participating in targeted abuse," the message said.

"In order to ensure that people feel safe expressing diverse opinions and beliefs on our platform, we do not tolerate abusive behavior. This includes inciting other people to engage in the targeted harassment of someone."

The "tarred and feathered" tweet was part of a longer string of tweets on the children's vaccine issue. Some suggested that Twitter might have shut the account down after several controversial tweets over time.

And in Quebec, where Attaran caused a major stir earlier this year, some celebrated.

The suspension has "nothing to do with Quebec," Attaran said, but it comes after a high-profile political fight in March that drew the prime minister's attention.

Attaran was pilloried by Quebec Premier François Legault when he said Quebec was led by "a white supremacist government" that is too tolerant of racism.

Legault said it was "unacceptable" and called on the university's president to condemn Attaran in strong terms, which the president declined to do, though he said he isn't in favour of "polarizing" tweets.

Trudeau also waded in, however, saying "enough of the Quebec bashing" in some French comments.

"Lately when I have [criticized Trudeau], Liberal partisans have been complaining to Twitter," he said.

Twitter spokesperson Cameron Gordon told CTV that the company doesn't "comment on individual decisions from our Trust & Safety team," which are charged with enforcing the platform's rules.

He sent a link to the the "abusive behavior" policy.

"We consider abusive behavior an attempt to harass, intimidate, or silence someone else’s voice," the policy says, going on to list the types of such behaviour, including "wishing, hoping, or calling for serious harm on a person or group of people."

ONTARIO MPP NOT BANNED FOR 'TAR AND FEATHER' TWEET

Attaran said the company's decision, if it's over the "tar and feather" comment, is inconsistent -- an Ontario politician made the exact same so-called threat, but in more detail, last month.

MPP Randy Hillier, who was part of the Conservative caucus until he was ousted in 2019, opposes vaccine mandates and other COVID-19 measures.

On Oct. 2, on Twitter, he asked Ontarians to “bring a pot of boiling tar and a case of feathers” to the legislature when it reopened, according to a record of the tweet saved by another MPP.

“Each politician who arrives deserves both a tar and feathering,” the tweet says, tagging three other politicians, including Ontario Premier Doug Ford.

Ontario Provincial Police ended up reviewing the tweet to see if it warranted further action.

"Randy Hillier is an anti-vaxxer who literally incited people to violently tar and feather politicians—and Twitter did not ban him, even after police got involved," Attaran told CTV.

"Randy’s account is up and working today," he said.

He found it unacceptable that for him, a pro-vaccine public figure "pushing Trudeau to help save our kids from COVID, when I mention 'tar and feather' just metaphorically and obviously not literally, Twitter calls that harassment and shuts me down."

A new study has found an increased risk of certain long COVID-19 symptoms up to two years after an original infection.