Opinion: Paging Doctor Fauci, your presence is needed in Quebec 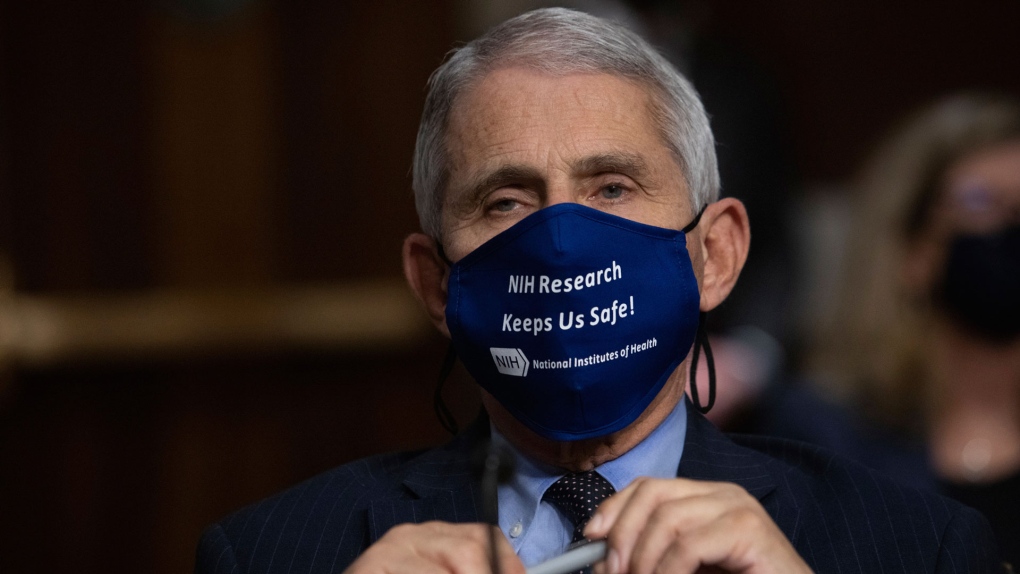 FILE - In this Sept. 23, 2020 file photo, Dr. Anthony Fauci, Director of the National Institute of Allergy and Infectious Diseases at the National Institutes of Health, listens during a Senate Senate Health, Education, Labor, and Pensions Committee Hearing on the federal government response to COVID-19 Capitol Hill in Washington. (Graeme Jennings/Pool via AP)

MONTREAL -- If you have been following Quebec government COVID-19 news conferences you should be accustomed to the harmonious choreography between our political leaders and public health officials sitting congenially side by side.

This is in sharp contrast with White House briefings with former-president Donald Trump laying out his contentious COVID policies with Dr. Anthony Fauci, director of the National Institute of Allergy and Infectious Diseases (NIAID) standing behind him poker-faced, in stone silence, with such extraordinary composure that even if Trump had stepped on his toes he would not have flinched.

Then there was that unforgettable news briefing when Trump suggested injecting disinfectants in the body to cure COVID, with Dr. Brix, Coordinator of the White House Coronavirus Task Force visibly squirming, probably regretting she cancelled that root canal appointment scheduled that day.

Public health can be a tough playing field.

Having spent almost three decades working in the field in the US and Quebec as a public health officer, I know that when you start to feel too comfortable at your job, you are probably doing something wrong.

Public health advisors are often placed in adversarial situations balancing out the demands of superiors, usually government bureaucrats or politicians with their overriding moral and professional responsibility to the patient, in other words, the population.

To draw an analogy, there would be something fundamentally wrong if your doctor came to you to discuss your diagnosis accompanied by a delegation of hospital administrators and pharmaceutical industry investors.

There is no need to discuss the incompetence in how Quebec has managed the pandemic, the inexcusable conditions which led to the deaths of thousands of residents in CHSLD's and the elderly, the failure to address the worsening situation in schools, the terrible decisions which led to the catastrophic January outbreak following the holiday season, the constant flip-flopping and the denial of obvious facts.

Most importantly, what has been lacking is the inability to listen to the science and adopt measures, which have been proven to bring down the numbers down to insignificant numbers in countries such as Australia, New Zealand and, oh... not to forget little Nova Scotia.

The burning question is, where was Quebec Public Health during this debacle?

The US Center for Disease Control (CDC) has just released a report updating COVID school guidelines which set key criteria under which in-person schools would remain open.

It should be no surprise that Quebec schools fail to meet CDC's minimum requirements to mitigate COVID transmission. These requirements include mandatory masking for all students from kindergarten to grade 12, a minimum of two-metre distancing for all students, compliance to ventilation standards set by ASHRAE (recognized in Quebec), and more. Under these guidelines, most Quebec schools would be required to switch to online learning or hybrid programs.

Will our public health officials take note of the new CDC guidelines and understand that Quebec schools and daycares are dangerous breeding grounds for the virus and its variants?

It is more likely that they will be dismissed as more inconvenient truths not in line with the politically correct narrative.

More trustworthy are the numerous doctors, infectious disease specialists, scientists and epidemiologists who overwhelmingly agree that we are heading in the wrong direction especially with the emergence of the new variants.

We could have done much better since the beginning of the pandemic, and there is no better proof than to see the case counts dropping to their lowest numbers in months, but scientists, including some from Quebec's own INSPQ are sounding the alarm that this may just the calm before the storm if we lift restrictions too quickly.

Researchers project over 4000 daily cases occurring in Quebec by April, which would overwhelm the system.

By now, It should be obvious to everyone that half measures don't work, they just prolong and worsen the pain.

As difficult as it is to hear, now is not the time to let our guards down but to react with even fiercer and more comprehensive short-term measures hoping the vaccine will bring some relief soon.

There is one very important lesson to be learnt from this pandemic: Protecting the health and safety of the population is the most fundamental responsibility of any government. Yet, Quebec Public Health has not assumed a leadership role.

If Public Health is ever to truly restore its credibility and trust with the Quebec population, it must start by being totally dissociated from the political sphere and its influences, something that the current administrative structures do not allow.

The role of a public health director is to inform and influence government decisions, not to be its sidekick. Open disagreement between political leaders and public health advisors is a healthy process which can only lead to better overall policies. Unfortunately, this is unlikely to happen in Quebec anytime soon as long as loyalty to the political establishment is a prized asset and dissenting opinions are silenced.

In the US, Dr. Anthony Fauci has been trusted and respected by the public for his stellar reputation and sometimes brutal honesty, but also because he maintained his distance from Trump's controversial opinions and policies sometimes at the cost of infuriating him. His position as head of the NIAID is unassailable and gives him greater independence to express viewpoints consistent with scientific fact and established public health practices.

Unfortunately, we do not have a Dr. Fauci in Quebec.