A Montreal high-school teacher was stabbed Thursday by a student who walked into the room and attacked him for "reasons unknown" in front of other students, the school board says.

Maxime Canuel, an arts teacher in his 40s, suffered minor injuries to the upper body after being cut with a "sharp object" in an attack a Montreal police spokesperson called a "stabbing."

He received lacerations to his side, police said, and has been transported to hospital. His life is not in danger.

In a tweet, the English Montreal School Board said the teacher has undergone surgery after the attack and that "given the circumstances" the school will be closed Friday. Since Monday was already a professional development day, classes will resume on Tuesday, according to the board.

Police spokesperson Jean-Pierre Brabant wasn't able to describe in detail what kind of weapon was used, but said it was "maybe a knife" and that it was recovered on the scene.

The incident took place at 10:10 a.m. inside the John F. Kennedy High School, near the St-Michel metro station. It's next to an adult education centre of the same name.

A SWAT team arrived on site and took a 16-year-old male student into custody around 11 a.m., police said.

"It seems that the teacher had an altercation with a student," Brabant told CTV.

"From there, we had information that the student was still inside that school, so officers put a lockdown in the school -- we asked the teachers and all the students to stay in their classes."

Once everyone's whereabouts had been accounted for, it turned out the student was no longer in the school, he said. Police say they obtained the suspect's description and name from school administrators.

After fanning out around the school, officers arrested the boy not far away and brought him to a detention centre, where they say he will later be questioned. 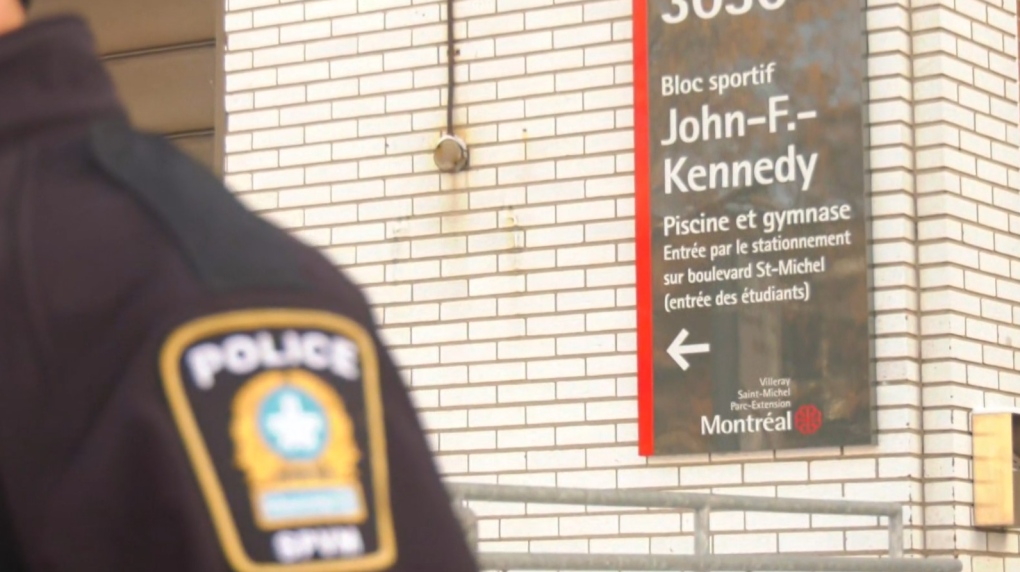 ATTACK CARRIED OUT IN FRONT OF CLASS: EMSB

English Montreal School Board spokesperson Mike Cohen told reporters outside the school that the stabbing appeared to be unprovoked, according to the accounts he had heard.

"What happened was this Secondary Three student went into the classroom, [a student who] who wasn't in that class at the time," he said.

The student did have that teacher in another class, said Cohen. He is an art teacher who is "very well liked," he added.

"For reasons unknown to everyone, he pulled the knife and stabbed the teacher. This was done in the front of a group of students who were already there. We're obviously in a state of shock," Cohen said.

"The student left the classroom with his knife, apparently -- he showed the knife to all the students, put it back in his in his pants, and just walked out of the building, and then the police apprehended him."

About the suspect, Cohen said, "we do know that this student did face some disciplinary issues over the years," but nothing that would have led school administrators to expect this kind of violence.

While the teacher's injuries aren't critical, he was bleeding heavily, Cohen said.

Elected officials from the Montreal area condemned the attack on social media Thursday, including Prime Minister Justin Trudeau who said he was "shocked" by what happened to the teacher.

"My thoughts are with the John F. Kennedy High School community and, in particular, the teacher who was stabbed this morning. I’m wishing him a full and fast recovery, and I’d like to thank the authorities who responded so quickly," the prime minister tweeted.

I’m shocked by the news coming from Papineau. My thoughts are with the John F. Kennedy High School community and, in particular, the teacher who was stabbed this morning. I’m wishing him a full and fast recovery, and I’d like to thank the authorities who responded so quickly.

"We offered our support to the school and the school board," he said on Twitter.

The board is bringing in its trauma team to talk to the students and help them work though the upsetting experience, Cohen said. It is the second time in about six weeks it has done so after a stabbing.

Many students in Cote-des-Neiges also witnessed the fatal stabbing of 16-year-old Jannai Dopwell-Bailey on Oct. 18 and were helped by the board's trauma team.

As the news of the stabbing broke on Thursday morning, many parents went to the school to try to ensure their children were safe, though they remained inside the school.

"I checked the news and I heard, more or less, and I panicked," one mother, Sonia Arruda, told CTV.

"My daughter... she just texted me telling me she's going to get out after lunch," Arruda said, but added that she wouldn't leave until she saw her daughter.

"She said she was fine, but I just want to see my daughter. This is too much for parents."

She said she was shocked because her daughter has attended the school for three years, has had an "amazing" experience, and there's never been any violence.

Another mother, Franca Patrizio, said she lived a parent's worst nightmare when her daughter texted her in fear.

"I get a text from my daughter saying I'm not sure if this is fake or real, but we're in hiding and [in] lockdown," Patrizio said.

While the suspect was found, Patrizio said police had told her that they couldn't say when the students would be allowed out of the building while they finished the immediate investigation.

Cohen said just before noon that the board had decided to keep the students in the building all day while they managed the aftermath.

"Partly because we don't want them to be involved in a media frenzy," he said, but added that it is also to make sure the school can be the first to talk to each student.

"They also don't have a lot of information. Of course, most of them didn't see this," he said. "So they're they're basically going to be told what happened, and we're sending notifications to all the parents to let them know all the kids are OK."

Mayor Valerie Plante expressed her sympathies for the students and teachers at the school, as well as the teacher who was attacked and the student accused in the stabbing.

“This is an awful situation,” Plante said at an afternoon press conference, adding that she felt worried, as a mother herself, about the violent attack.

She said the incident is another example of why an upcoming Montreal police-led forum taking place in January is crucial in getting a better understanding on the nexus of violent crime and youth in the city and what to do about it.

“What are you seeing, what are you hearing and how can we better protect and do some prevention? Because I agree that prevention is the key.”