Get ready for roadwork.

The city of Montreal is spending a record $531 million on construction in 2016.

That breaks down to $252 million on aqueducts, sewer systems and water mains, $200 million on repaving, and $79 million for what it is calling large projects.

Drivers will want to avoid Cote Ste. Catherine St., currently six lanes across, which will go down to one lane for much of the next 20 months.

“Incalculable, in terms of time, frustration, productivity. It's going to be rough up to the next two years,” said traffic consultant Rick Leckner.

Montreal is promising up-to-the minute information on its Twitter feed, @MTL_Circulaton, and frequent updates on its website.

“We'll be using Bluetooth technology to inform drivers and other users of the road in real-time the delay. They can expect with alternate routes. It shows we're trying different ways to accommodate and to minimize the impact on our citizens,” said Perez.

Motorists should do their part as well.

“Try to use public transit to the extent that it's available, try to car pool try to use staggered hours,” said Leckner.

The city of Montreal provided this list of the 52 largest projects that will take place. 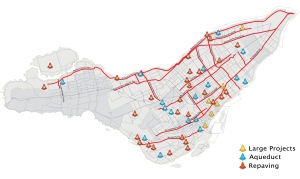 Map of major construction locations in Montreal for 2016