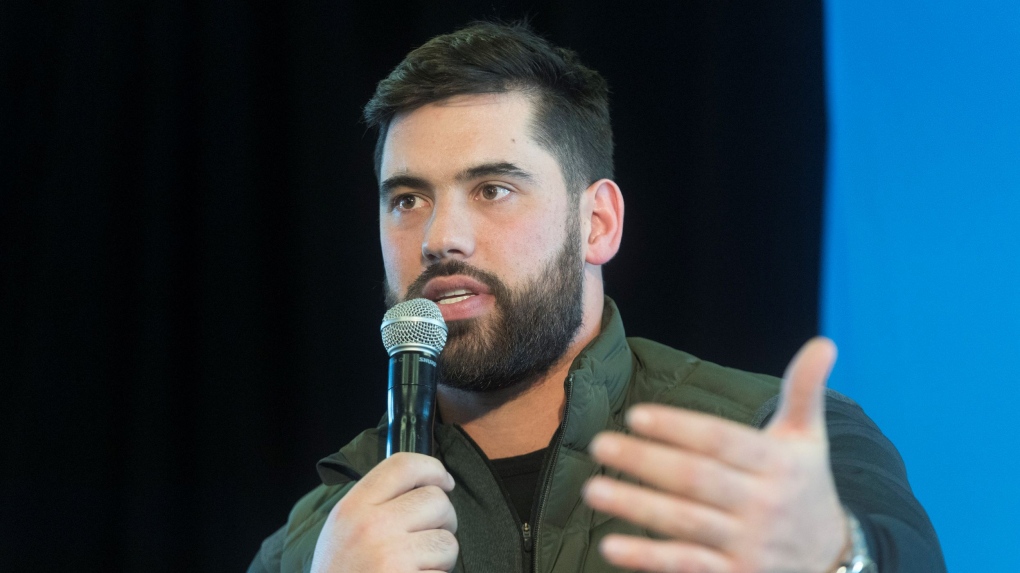 Super Bowl champion and Kansas City Chiefs player Laurent Duvernay-Tardif speaks during a news conference prior to an event to celebrate his win in Montreal, Sunday, February 9, 2020. THE CANADIAN PRESS/Graham Hughes

The Montreal Alouettes acquired the rights to offensive lineman Laurent Duvernay-Tardif from the Calgary Stampeders on Thursday.

If the McGill alumnus signs a deal with the Alouettes or any other CFL team, Montreal would send its next second round pick to Calgary.

The Stampeders would then have the option to trade the next first round pick to the Alouettes, if it turns out to be higher than Calgary's.

"We are happy to have proceeded with this transaction. Laurent is a football icon in Montreal and Quebec," said Alouettes General Manager Danny Maciocia said in a press release.

"We wish him the best success with his football career moving forward, and are satisfied knowing that if he does play in Canada, he will do so in a city and a stadium that he knows very well."

We have just acquired the rights to offensive lineman Laurent Duvernay-Tardif! If he plays in the CFL, he’ll be doing so in his own backyard! 👉https://t.co/6zeMGO75xL pic.twitter.com/Vxqs8Q7f5P

In 2020, the former André-Grasset College Phoenix player was awarded the Lou Marsh Trophy, given to the athlete of the year in Canada.

The 31-year-old Quebecer, who juggles a career as a doctor and professional athlete, chose not to play in the NFL in 2020 and to focus on his career in medicine, in the midst of the pandemic, in order to help those who needed it most.

This decision earned him one of Sports Illustrated's prestigious awards, the annual Sportsman of the Year.

The Stampeders claimed him in the third round (19th overall) in the 2014 CFL Draft.

-- This report by The Canadian Press was first published in French on July 14, 2022.

A series of explosions rocked the eastern Ukraine city of Kharkiv early Saturday, sending towering plumes of illuminated smoke in the sky and triggering a series of secondary explosions.

The Public Health Agency of Canada (PHAC) is warning Canadian travellers entering Uganda to take extra precautions before flying due to an Ebola outbreak that was declared in the nation last month.

Did vaccines make a difference? Study looks at rates of severe illness from COVID-19

A study of 1.6 million U.S. patients has found that COVID-19 vaccines and boosters lead to low rates of severe illness and death.

A man with a large kitchen knife who terrorized tourists and locals on the Las Vegas Strip in a stabbing rampage that left two people dead and six others wounded will be charged with murder, the region's top prosecutor said Friday.