Part of downtown Montreal was turned into an icy, gushing river as a major water main break paralyzed the city Monday afternoon.

Police are asking people to avoid the area after flooding sent people slipping and sliding, and traffic was jammed and rerouted during rush hour.

Both the downtown core and parts of McGill University were submerged due to a major water main break at the McTavish basin. City officials say it was a 120-centimetre pipe that burst during work on Pine Ave.

Pedestrians and drivers should avoid downtown from Pine Ave. to Rene-Levesque Blvd. and University St. to Peel St. as workers clean up the area. Some STM busses were rerouted during the flood, but the metro system was working as normal.

Workers closed the three main valves connected to the pipe at 7 p.m. but officials asked people to continue to avoid the area during cleanup, particularly because icy roads will become very slippery overnight.

Those caught at Ste. Catherine St. and Mansfield St. Monday afternoon were forced to navigate ankle-deep water flooding streets and sidewalks. Many were slipping and sliding in the icy, gushing water, creating a chaotic scene, though good Samaritans could be seen helping strangers get through the mess.

Philippe Whitford, a 38-year-old program analyst, gave new meaning to the term double-bagging: he wrapped himself in two layers of green plastic bags and made his way through the knee-deep water outside his building.

While he felt cold in the -9 C weather, he was grateful that he managed to stay dry.

With ice quickly forming across the area, his concerns turned to the Tuesday morning commute.

"It's going to be a mess when this all freezes," said Whitford, who works for a finance company.

As the streets thickened with ice, firemen stabbed at drain openings with pike poles to get the water to go in. There were also large road graders pushing the water around trying to get it to disperse.

Countless basements in the area were also flooded, including the parking garage of Place Ville Marie, which reportedly had as much as two metres of water in it.

McGill University asked people to avoid the upper part of the downtown campus Monday due to severe flooding. All evening classes at McGill were cancelled Monday, as staff at the university warned that several of the university's buildings were flooded.

Late Monday, McGill issued an update on its blog, stating that the school will operate largely as normal Tuesday and that staff should report for work.

There were exceptions, however. staff working in the Wong Engineering Building, Service Point and Welcome Centre, the James Building Annex and on the second floor of the James Administration Building were asked to stay home and work from home to the extent they can.

McGill also said to not assume elevators will be working Tuesday. Classes normally held in Wong will still take place, but in other locations. Students and professors will be contacted by email, the blog read. Teaching assistants are asked to get in touch with their professors for instructions.

City officials say the incident did not affect the quality of drinking water.

He said the damage occurred mostly below street level.

"The damage is mostly damage where we have basements where there's underground parking lots," he said as he stood near a water-logged intersection, as firefighters cleared clogged sewers and front-end loaders scooped up water.

Two minor injuries were reported, as of 7 p.m. The local ambulance service said the injuries occurred when people slipped and fell.

The video below posted to YouTube shows someone swept up in the flood, helpless against the tide washing out the street. The video below it shows the site of the water main break right after it burst. 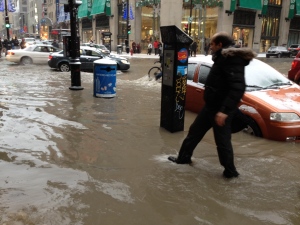 Images of the flood in downtown Montreal. Photos sent to CTV Montreal on Twitter by CTV viewers and reporters.