Maclean's and carnival organizers settle out of court 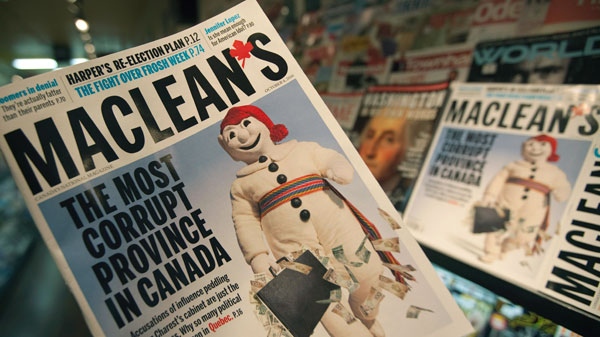 The latest edition of Maclean's magazine is seen at a news stand in North Vancouver, B.C. Friday, Sept. 24, 2010. (Jonathan Hayward / THE CANADIAN PRESS)

QUEBEC _ There is peace between Canada's national news magazine and a fictional carnival snowman.

Maclean's and the Quebec City winter carnival have avoided a court battle over an unflattering cover of Bonhomme Carnaval.

The sides have reached a deal aimed at sparing the snowman's reputation _ and sparing both sides unwanted legal fees.

Carnival organizers had threated to sue Maclean's over a doctored photo showing Bonhomme holding a briefcase stuffed with kickback money next to the headline: The Most Corrupt Province In Canada.

The cover caused a media frenzy in Quebec, and drew indignation from the provincial government.

A carnival spokesman says the magazine has agreed to publish a letter in its next edition acknowledging that the beloved Bonhomme is the event's exclusive intellectual property.

The magazine will also express regret if readers, based on the cover, reached inappropriate conclusions about the iconic snowman.