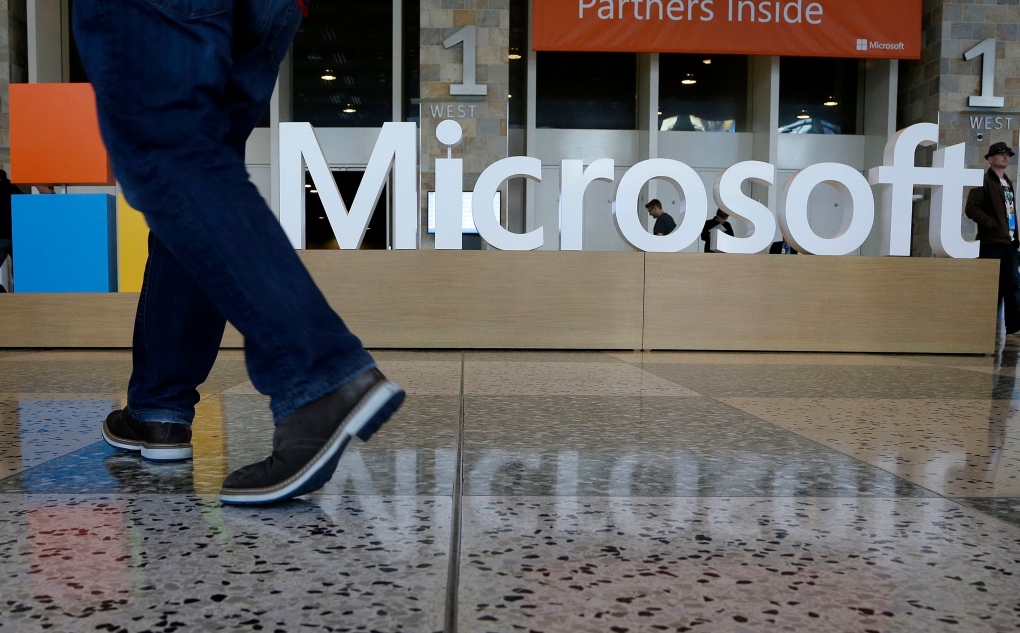 A man walks past a Microsoft sign set up for the Microsoft BUILD conference at Moscone Center in San Francisco on April 28, 2015. (AP / Jeff Chiu)

The lure of Montreal's burgeoning artificial intelligence hub is helping the city to attract highly skilled talent even though Quebec is facing historically low unemployment, officials from tech giants like Google and Microsoft and municipal officials said at an AI conference.

These people can obtain lucrative employment packages, but the desire to work on specific projects often drives their decision.

"In our field there's already zero unemployment so it's really attracting all the key talent out there," he said in an interview at a Montreal Board of Trade-sponsored AI conference on Monday.

Statistics Canada reported meanwhile that Quebec added the most jobs in Canada in December, pushing the unemployment rate to 4.9 per cent. Montreal's rate fell to 6.1 per cent while Quebec City's rate was 3.9 per cent.

"Amongst the Y Generation there's a huge cool factor about really collaborating on something that's going to make a difference in the world," added Microsoft spokeswoman Sylvie Giguere.

"It's a question of finding the right fit between the opportunity and the candidate more than anything else."

David Beauchemin, leader of Google's cloud division in Montreal, said finding specialized talent is always a challenge but Montreal's developing AI hub has made it easier to lure workers from abroad.

In addition to working for global companies, these people love Montreal's quality of life, he said.

"By having a hub here that was set up by university researchers, some other companies that we work with and Google itself has helped to just attract and create a buzz -- an ecosystem that is self-sustaining."

Deep Learning pioneer Yushia Bengio told the conference that beyond financial compensation, researchers want to work with great talent and in a city that also cares about ethical questions surrounding the development of AI.

Beauchemin said the province's low unemployment rate has forced companies to look beyond local candidates to seek out talent from elsewhere.

He added that growing immigration roadblocks forming in the United States have also contributed to some people instead choosing to work in Canada.

Whereas the Americans use a lengthy lottery system, Canada's federal government has championed a global skills strategy to award working permits in 10 days.

The group expects about 250 foreigners, including some 200 from France, have elected to emigrate to Montreal after it conducted seven hiring missions last year, including one near Silicon Valley and two in Paris.

"We feel that with unemployment rates that are as low as we're seeing them today that there will definitely be a need and some enthusiasm to continue to do those hiring missions abroad," said Montreal International CEO Hubert Bolduc.

The tech sector in Greater Montreal has added 5,000 workers annually over the last five years. The five per cent annual growth far exceeds the employment growth for other sectors of the economy, added Montreal International chief economist Christian Bernard.

In addition to convincing workers to relocate, the group is working to convince more foreign students to remain in the city after they graduate.