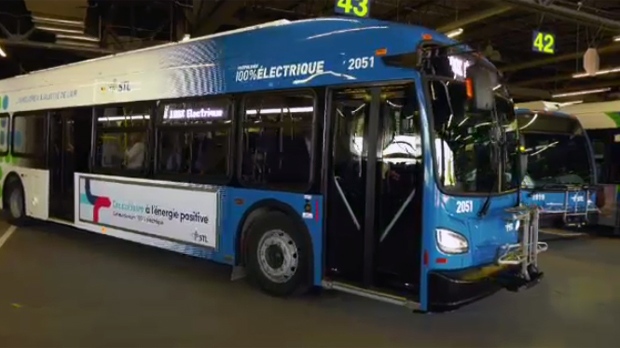 The STL unveiled the first of ten all-electric buses on Aug. 15, 2019. Each bus will have a range of 250 km before needing to be charged for three hours.

The STL has acquired ten all-electric standard-size that will enter into service in 2020. The first bus, demonstrated Thursday, will be tested in the coming months.

The transit company is working with the Association du transport urbain du Quebec, and the Societé de transport de Montreal which hopes to purchase 30 additional buses.

Each bus will reduce greenhouse gas emissions by 70 to 80 tonnes a year and will offer transit users a smoother and, especially, a quieter ride.

Each bus takes around three hours to fully charge.

The reason the STL is not switching more of its fleet faster is that for now they only have space for three fast chargers but in the future, with new installations, all its buses will eventually become all-electric.

"By 2024, purchases of gas-powered buses will be a thing of the past for the STL," said Eric Morasse, Chair of the Board for the STL.

Morasse also said that the bus corporation is a leader in electrification since 2012 and is committed to reducing GHG emissions by 45 percent by 2028.

Canadian-based New Flyer Industries Canada ULC has received the contract to manufacture the battery-electric buses for the STL, for summer 2020 delivery.