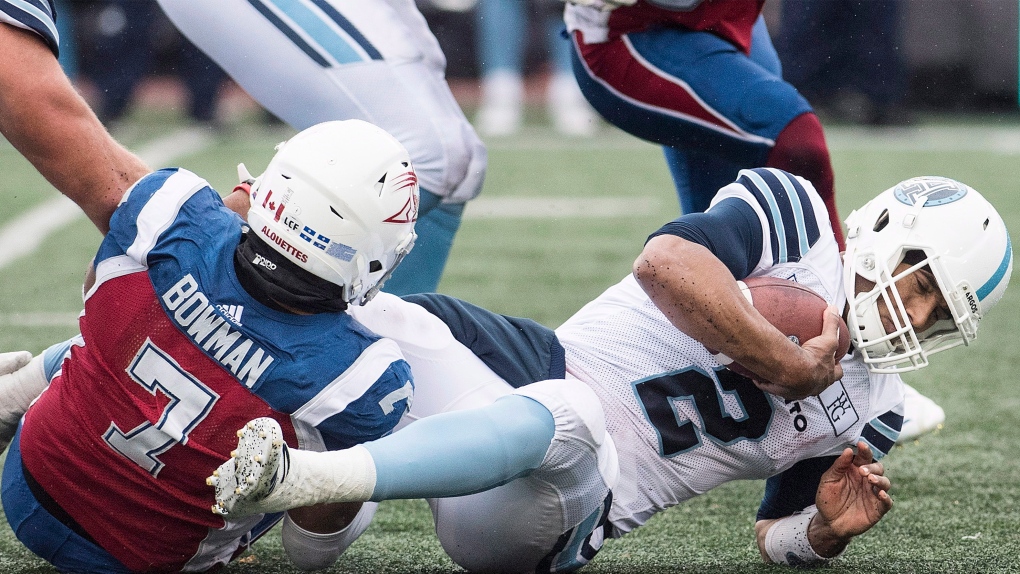 The Heisman Trophy-winning quarterback threw for one touchdown, while Will Stanback scored two to lead the Montreal Alouettes to a 40-10 rout of Toronto on Sunday, in a battle of beleaguered basement dwellers.

Manziel had lost his six previous games with Montreal.

George Johnson added a touchdown in the Als' (4-13) final home game at Molson Percival Stadium, while defensive lineman John Bowman recovered a fumble for his first touchdown in almost 13 seasons with Montreal.

Armanti Edwards scored the lone TD for the Argonauts (4-13), who remain winless on the road this season.

The Alouettes broke the game open midway through the second quarter when they parlayed a blocked field goal attempt into a touchdown. Woody Baron got his hands on Drew Brown's kick, and John Bowman recovered the ball. Manziel threw a lateral to Eugene Lewis, who chucked a 61-yard touchdown pass to Johnson to put Montreal up 20-4 at 8:26.

The teams traded first-quarter field goals in front of a sparse crowd -- it was announced at 17,583 but looked significantly less than that -- that braved the dreary, drizzly weather. Then Manziel found Stanback with a 42-yard touchdown pass to end the first quarter, sending Montreal into the second with a 10-4 lead.

Johnson's TD and a Bede field goal stretched Montreal's lead to 23-4 at halftime.

Franklin orchestrated a third-quarter touchdown drive that began with his 41-yard pass to Llevi Noel. Eight plays later, the Argos QB found Edwards with a seven-yard touchdown pass with 3:21 left in the quarter to cut Montreal's lead to 26-10 with one quarter left. Toronto missed on its two-point convert attempt.

With 5:13 to play, Ryan Brown forced a Franklin fumble in the end zone, which Bowman recovered for an easy touchdown.

Antonio Pipkin replaced Manziel and found Stanback for a 10-yard touchdown with 31 seconds left in the game.

The win was a bit of revenge for the Als, who lost 26-22 to the defending Grey Cup champion Argonauts last week at BMO Field. Toronto's victory ended a seven-game losing skid, and saw Toronto Franklin run in two touchdowns, tying Doug Flutie's single-season franchise mark of 14.

The Argos' winless streak on the road includes a three-point loss in Montreal on Aug. 24.

Manziel, meanwhile, made headlines across North America when he signed with Hamilton prior to the start of training camp after a tempestuous and short-lived NFL career. But his stint north of the border had been mostly bad news until Sunday. The 25-year-old saw zero regular-season action with the Tiger-Cats before being dealt to Montreal on July 22.

He lost his first two starts for the Als and missed time with a concussion, then upon his return wondered aloud to the media why he wasn't playing. He returned to the starting lineup just over a week later.

Manziel is under contract for one more season with the Als, who announced earlier in the day that they had extended the contracts of quarterbacks Pipkin, Vernon Adams Jr., and Jeff Mathews.

Montreal wraps up its season next week in Hamilton, while the Argos are in Ottawa.