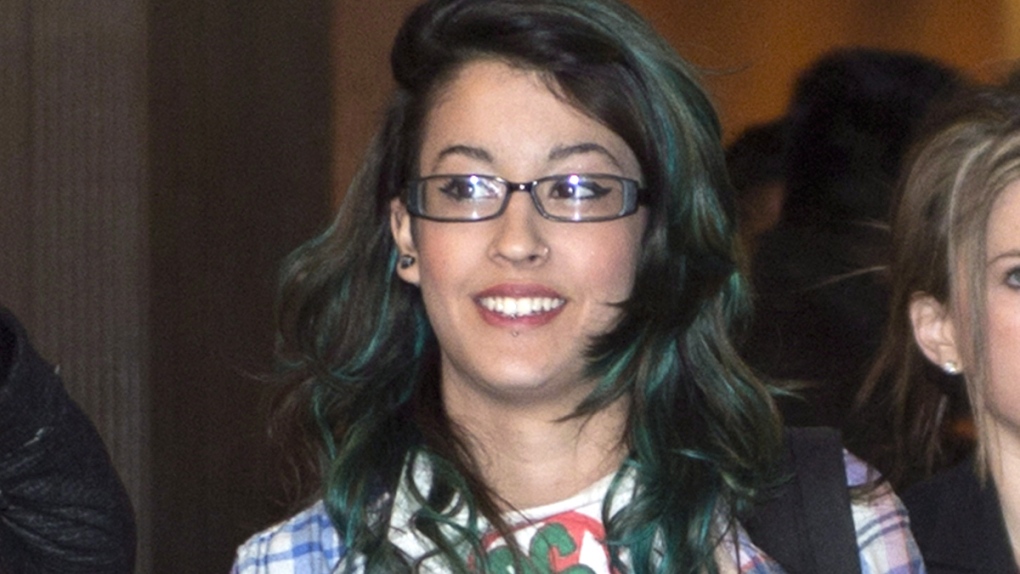 Jennifer Pawluck, charged after posting online a photo of a graffiti showing Montreal police commander Ian Lafreniere with a bullet in his head, leaves a courtroom following her arraignment, in Montreal, Wednesday, April 17, 2013. (Paul Chiasson / THE CANADIAN PRESS)

MONTREAL -- The guilty verdict against a woman who posted a photo of graffiti depicting a Montreal police officer with a bullet in his head should remind users of social media to be cautious about what they publish, experts said Friday.

Jennifer Pawluck, 22, snapped a shot of someone else's graffiti work and uploaded it with anti-police hashtags to Instagram, a photo-sharing site.

Cmdr. Ian Lafreniere, who was depicted in the graffiti, told Pawluck's criminal-harassment trial the image shook him and upset his wife and children.

Experts echoed the judge's warning that online actions can have major consequences.

"Just because it's on social media, it doesn't mean there aren't laws -- criminal or civil -- that wouldn't apply to that conduct," said Teresa Scassa, a law professor at the University of Ottawa.

Pawluck's arrest in 2013 was criticized in some circles as unnecessary. Following Thursday's verdict, that feeling was rekindled as supporters called it outlandish and suppression of political dissent.

Quebec court Judge Marie-Josee Di Lallo ruled Pawluck was guilty of harassment, that the Crown had demonstrated Lafreniere felt harassed and that it was reasonable for the senior police officer to feel his safety was threatened.

Neither Pawluck nor her lawyer have said whether they'll appeal.

Prof. Robert Currie, a law professor at the Schulich School of Law in Halifax, said the Criminal Code provides protection, to a point, for people who voice dissent.

"The Criminal Code explicitly says it has to be a reasonable perception, not just 'someone said something vague and I felt threatened by it'," Currie said. "The judge found that not only had he (Lafreniere) subjectively felt that, but it was reasonable for him to feel that."

Di Lallo noted that a single keystroke can have consequences and Currie agreed there's a level of carelessness about online activity as people tend to lose sight of propriety and the law.

"I think there is a kind of psychological disconnect between the things people do online and their expectation of what the real world consequences will be," he said. "People are not careful enough."

Scassa said another problem with social media is the brevity of the medium -- photos and few characters leave little room to explain context and meaning. That leaves a lot of room for interpretation, in particular by a judge, she added.

He believes youth should be careful about their online activities as the musings can have a long-lasting effect.

"I think it is part of the education of every young person that they should be very careful about social media, stay off it, and not say controversial things," Grey said.

"I'm not happy this is so, but it's certain, without even talking about the case itself, that anyone that goes on social media takes a risk."