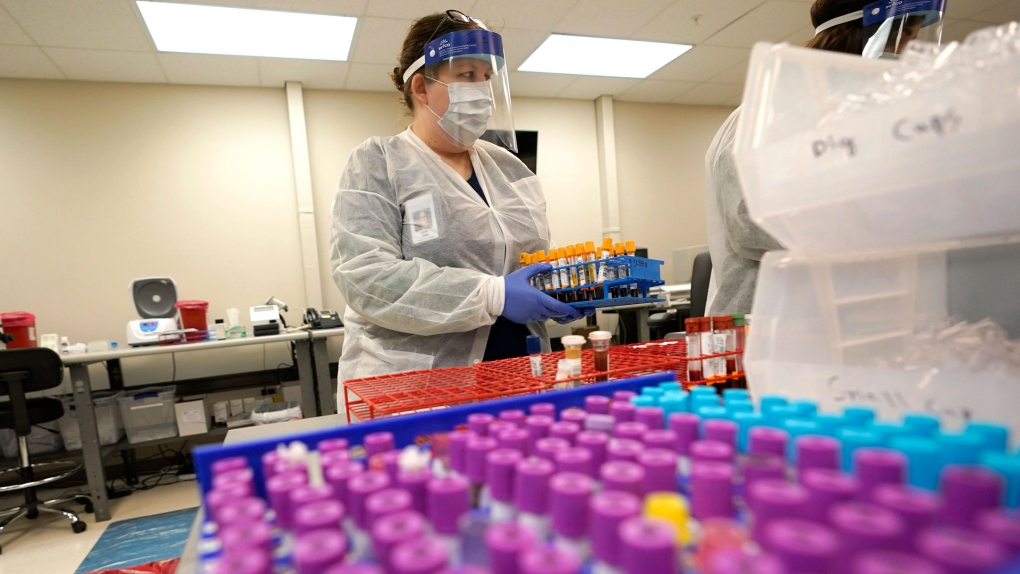 MONTREAL -- A large Montreal health clinic has been offering unregulated coronavirus antibody tests at $195 each, CTV News has learned.

This testing at Clinique Medic Elle is drawing harsh words from provincial and federal authorities, who are warning people to stay on guard about COVID-related health services they see advertised and check carefully whether they’re permitted.

“The ministry denounces this kind of clinic and asks the public to avoid this type of operation,” wrote Marie-Louise Harvey, a spokeswoman for Quebec’s health ministry, in an email.

Health Canada says it is paying close attention to a spate of “unauthorized” COVID-19 tests across the country and that it has begun to look into the Medic Elle clinic to see if there’s “non-compliance.”

As of late Tuesday night, May 12, an antibody test has been approved for use in Canada for the very first time. This approved test, made by an Italian company and just beginning its rollout now, isn’t likely to be easily available to the general public immediately, experts say.

Yet for two weeks before that, the Medic Elle clinic, on downtown Sherbrooke Street near Concordia University, was already offering its own tests, made by a different company.

The clinic has told clients it has done hundreds of the tests. It’s asking for doctor requisitions, and some doctors in Montreal appear to have been sending them.

The clinic’s owner, who gave her name only as Francine, told CTV News that the clinic was simply “a conduit” to a lab in Montreal that was offering and analyzing the tests. She said the tests they were using are approved by U.S. regulators and she didn’t believe there was a problem with offering them to local patients.

“Nobody here is profiteering,” she said. 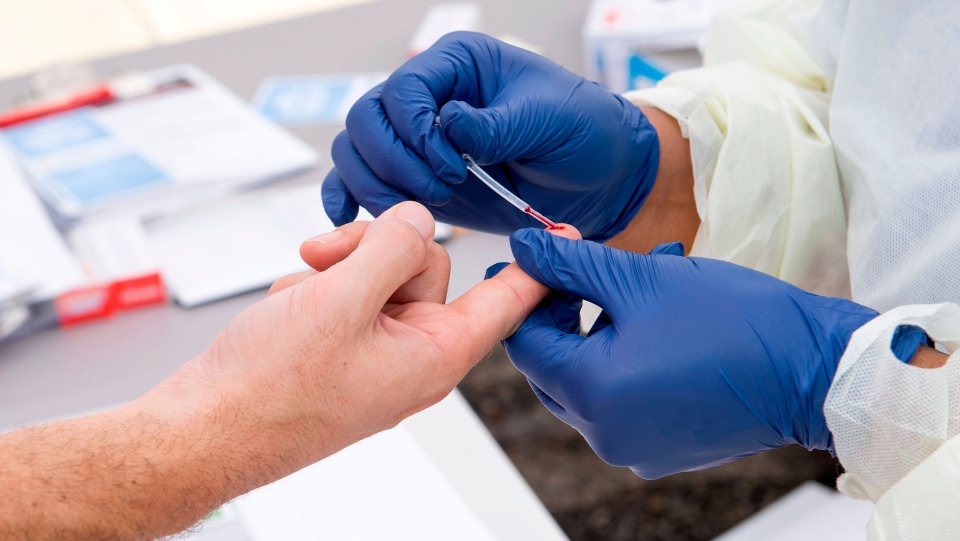 A health worker takes a drop of blood for the COVID-19 antibody test after at the Diagnostic and Wellness Center on May 5, 2020, in Torrance, California. (Valerie Macon/AFP/Getty Images via CNN)

Medic Elle advertises 40 health professionals offering a range of public services, including doctors’ appointments, and private ones, including Botox treatments.

On April 22, the clinic posted on its Facebook page that it would “have the COVID 19 antibody tests shortly at the clinic,” and depicted the tests as surefire. “It will tell you if you had COVID or are immune to it.”

The scientific community says the question of COVID immunity is complicated. Accurate antibody tests can show whether someone’s blood has certain proteins showing they’ve already fought off a given illness, in this case COVID-19. However, even when these tests can accurately pinpoint who’s had COVID-19, they don’t necessarily show immunity, simply because the available science hasn’t yet determined whether people develop lasting immunity to COVID-19 if they’ve had it once.

The Facebook post in April drew a flood of responses, many from anxious Montrealers believing a test would help them navigate the Canadian city hardest hit by COVID.

“I’ve been calling everywhere and it’s not offered in the public system,” one woman commented below the Facebook post. “I want to see my mom and knowing I’m immune to [COVID] would be incredible.”

A sponsored Medic Elle Facebook ad with similar wording also circulated over the following couple of weeks. And on April 23, the clinic sent a mass email to its clients, three of whom provided it to CTV News.

“Great News! We will have COVID-19 antibody testing* as of April 28, 2020,” the clinic wrote, using the asterisk to include a caveat in tiny lettering: “*to see if you may have been exposed to this virus.”

Medic Elle’s Facebook promotions listed the company that had developed the test: Bio-Rad, which is headquartered in California.

Bio-Rad has an antibody test but it hasn’t been approved by Health Canada, nor is it even on the agency’s list of “applications received” for COVID-related approvals.

The American regulatory agency, the Food and Drug Administration, better known as the FDA, did give emergency authorization to the Bio-Rad test for use in the U.S., in “authorized laboratories.” That directive came on April 29, a day after the Medic Elle clinic said it was slated to begin testing Montrealers.

U.S. authorities have flip-flopped on their approach to antibody tests in the last two months, with the FDA first saying in March that it would allow all such tests into the market, as long as they were labelled as unapproved. After a flood of tests by 170 companies, some of them fraudulent, the agency tightened its rules last Monday, requiring that all antibody tests undergo regulatory review.

Bio-Rad’s test, having received its emergency authorization, was one of about a dozen that has passed the new U.S. rules.

Canadian regulators say they’ve maintained a clear line. Until May 12, no COVID antibody tests were approved, and therefore if any such tests were circulating in Canada, they were doing so without the necessary approval, said Maryse Durette, a spokeswoman for Health Canada.

“No unauthorized kind of [medical] device can be used in any kind of clinic, public or private, in Canada,” Durette said.

CANADA HAS AN APPROVED TEST, BUT THAT DOESN’T MEAN IT’S EASY TO GET

Now, the only test approved in Canada is made by Italian company DiaSorin and called the LIAISON test.

That doesn’t mean there will suddenly be widely available antibody tests for any Canadian who wants one.

The first shipments of LIAISON tests will be sent out next week, said Jeff Kormos, corporate vice president at DiaSorin’s Canadian office, on Thursday. But supplies are still limited, there will be “pressure-testing” to see if the first tests appear to be working properly, and health authorities’ plans for how and when to offer the tests are still in early stages, he said.

“What’s happening right now is Canada and the provinces are trying to figure out exactly how to use serology testing,” Kormos said. “I don’t think there’s a whole lot of pressure being put around it, because we don’t have the supply and we do need to do more testing.”

Timothy Evans, a public health expert at McGill who is part of a federal COVID-19 immunity task force, says the public is likely to see more widely available antibody testing in a few months, when supplies have increased.

“I would imagine in the next two to three months there would be a larger number of approved antibody tests, and that will enable provincial health authorities to make decisions on how best to provide access to those,” said Evans. 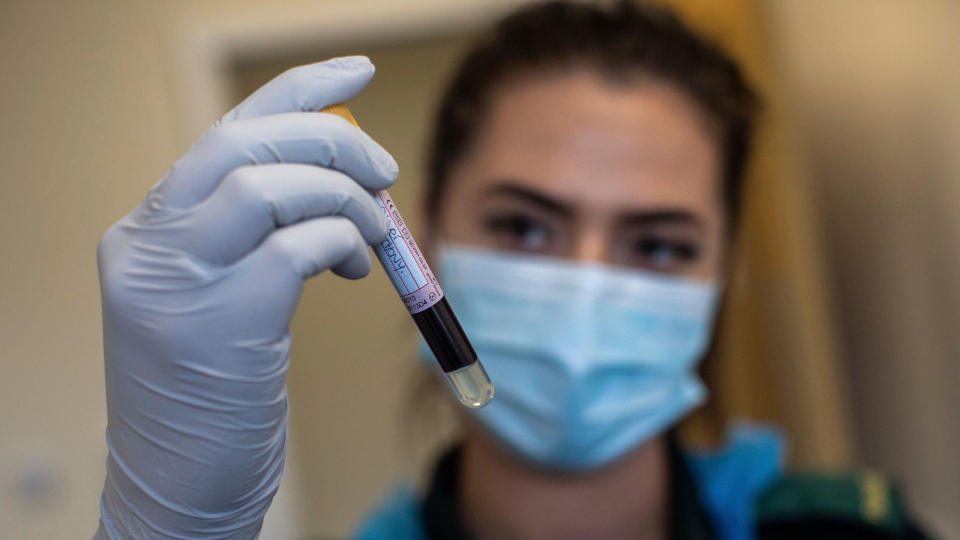 Health Canada said this week in a written statement that in Medic Elle’s case, the agency has “opened a case for follow-up and will take action should any non-compliance be confirmed.”

It’s against Canadian law to sell or advertise health products that make false or misleading claims, with potential consequences including recalls, product seizures and even prosecution and fines, if a case ends up in court, Health Canada said.

When Medic Elle posted about its tests on Facebook, including the price of $195, one patient who called and asked about a test was told they’re “slammed” with requests and have been doing 30 per day since late April, that patient told CTV News.

The owner of the Medic Elle clinic, Francine, told CTV News that she couldn’t guarantee the Bio-Rad tests’ efficacy, and the clinic was being careful to tell people not to stop social distancing or change their behaviour, even if they appeared to have the antibodies.

“Essentially, this test may or may not give you peace of mind,” she said. “That is up to the patients.”

As for the regulations, she said a local lab, CDL Laboratories, had offered the tests and told her they were “analyzed in the U.S.”

“In terms of the legality, you need to speak to them, not me,” she said. “It’s not my responsibility at all.”

Neither CDL Laboratories nor Bio-Rad responded to requests for comment. The president of CDL Laboratories, Laurent Amram, is also listed as a director of the Medic Elle clinic in its federal incorporation records.

However, Francine also said she had been in touch with a Health Canada compliance officer who allowed the testing to continue, though she said she couldn’t provide the officer’s name. She said that officer simply told her, on May 8, to remove all public advertising “because serology tests are not accepted by Health Canada.” The Facebook posts were taken down the same day, she said.

The clinic had been asking patients for a doctor’s requisition to get the Bio-Rad tests, several patients confirmed. A doctor who works one day a week at the clinic, Dr. Pierre-Paul Tellier, said he’d written two for patients who were “extremely anxious,” and that others have been sent from doctors outside the clinic.

“I knew that it wasn't fully accepted,” he said.

“I don't know anything about the legality, but I assume [it was okay], because the lab that's doing this is a private lab that’s pretty well known.”

CANADIANS ARE WARNED TO BE ON GUARD

Júnia Santos, who has been a patient in the clinic, said she was “upset” to be told by the clinic that the test was available if she could pay.

In the urgency of the pandemic, “the FDA took some emergency measures…for very specific laboratories to use these kits,” said Santos, 28, who just finished a PhD in neuroscience from McGill University and looked over the FDA records.

“I believe that we should still follow our regulations, even in a pandemic,” she said. “In the U.S. they do things we don’t tolerate here.”

Evans, the federal task force member, said that Canadians should remember that being asked to pay a high price for a COVID-related test should be one warning sign that something is amiss, and that any such test may not be “clearly within the healthcare system.”

In general, widely available public health efforts like the flu shot are offered for free or at low cost.

This Thursday, Medic Elle appeared to send out a new email to its clients, updating its antibody test offer. A client forwarded this email to CTV. “HEALTH CANADA APPROVED ANTIBODY COVID-19 TESTING AVAILABLE,” the clinic wrote in the subject line. The email specified that the clinic was now offering DiaSorin tests.

DiaSorin wouldn’t say where its first shipments next week were heading, saying it had to respect the confidentiality of its clients.