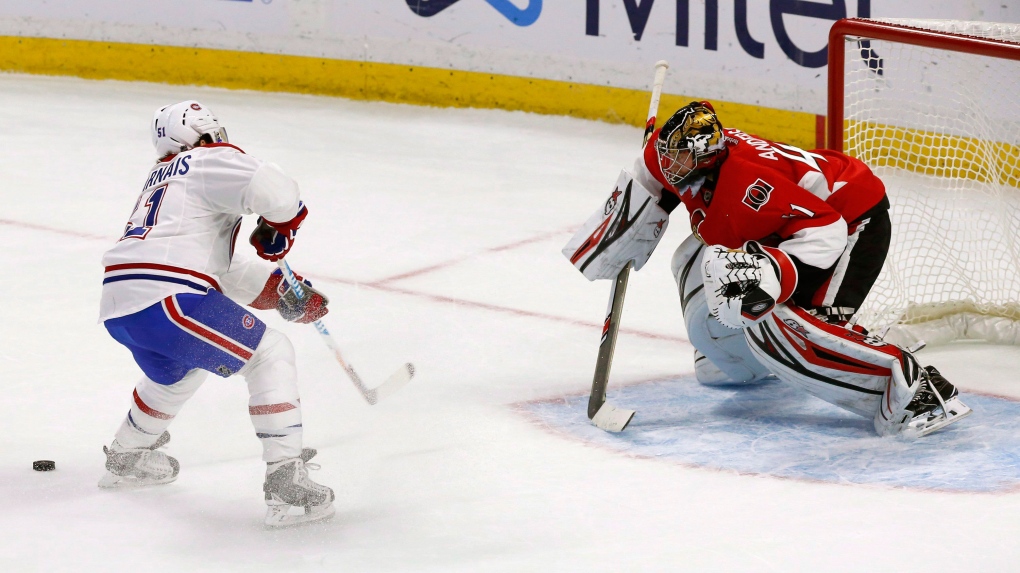 Guy Boucher trusted his instincts when selecting skaters for the shootout and it paid off for his Ottawa Senators.

The Senators head coach opted to go with defenceman Erik Karlsson and the captain scored the game winner to give Ottawa a 4-3 victory over the Montreal Canadiens on Saturday night to open the season with back-to-back wins.

Despite some struggles through its first two games Ottawa is finding ways to win. The Senators had a great start on Saturday, struggled midway, but came back strong and feel they can build off the effort.

"I think it was a well played game by both teams," said Karlsson. "We did what we had to do even though they scored two in the third. It didn't set us back. We kept going and stuck to our game plan and we didn't let ourselves stray away from what we felt we had to do to have a chance to win this game."

Canadiens coach Michel Therrien was pleased with the overall effort, but falling behind early made things difficult.

"Our execution wasn't there at the start of the game," said Therrien. "We made some adjustments in the second and it seemed to pay off."

It was a boisterous crowd of 18,195 at Canadian Tire Centre, but the Senators still fell short of a sellout despite Montreal being so close geographically.

Pyatt tied the game 3-3 off a great pass from Dzingel to beat Montoya stick side with 2:33 remaining in the third period. That forced the extra period and set up Karlsson's shootout heroics.

Dzingel was impressive all night and was rewarded for his efforts, getting ice time in the overtime session.

"I think I'm getting a little bit more confident and coach is playing me in bigger situations so just trying to grow my confidence and keep playing the way I do," said Dzingel, who also had an assist. "I'm bringing pace and speed and that's all I'm worrying about."

Dzingel opened the scoring at the six-minute mark of the first with a great personal effort as he picked up his own rebound and beat Montoya short side and made it 2-0 as Wideman's point shot deflected off Smith's skate.

Montreal cut the lead down to 2-1 with a power-play goal at the 15-minute mark of the second as Petry beat Anderson.

The Canadiens wasted no time in tying the game 2-2, as Lehkonen grabbed a loose puck and slide it through Anderson's legs before the period was three minutes old.

Ottawa couldn't capitalize on a two-man advantage for 1:49 as they failed to create any real scoring chances and the game stayed tied.

"That 5-on-3 kill gave us a lot of strength," said Lehkonen. "We found a way in the third period to bounce back and really fight for the win."

After trailing the entire game the Canadiens took the lead for the first time on Petry's second of the night midway through the third as his shot from inside the blue line beat a screened Anderson.