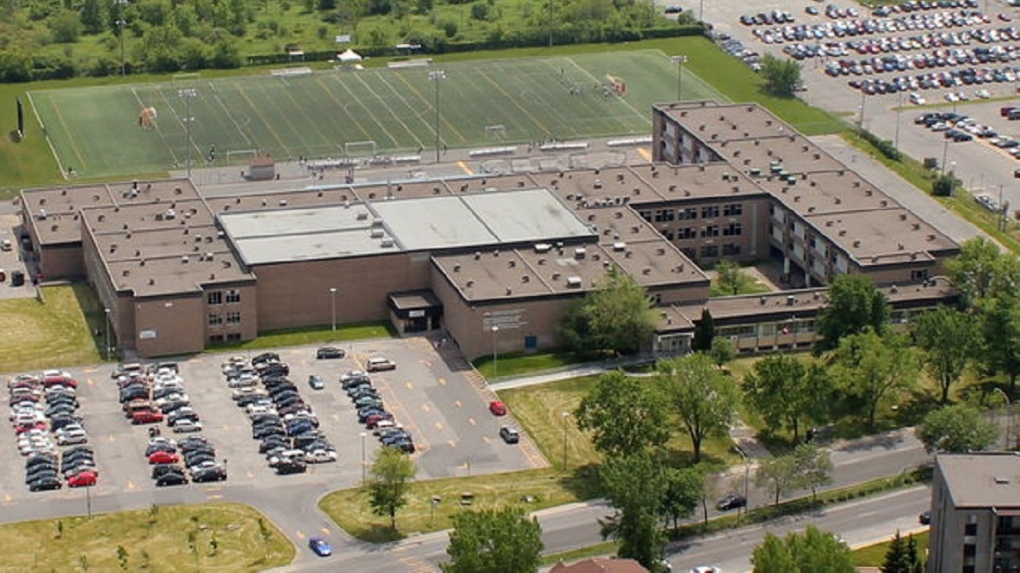 Parents and students at Laval Senior Academy were informed Saturday night that someone at the school tested positive for COVID-19. SOURCE LSA

At least 50 students at a Laval high school took part in a protest against COVID-19 rules that got briefly heated, and was captured on video, on Thursday.

The students at Laval Senior Academy were upset about the requirement to wear masks and that they're only allowed to eat in their school's cafeteria, said Sir Wilfrid Laurier School Board spokesperson Maxeen Jolin.

The students protested in the morning and then outside during the lunch hour. A video posted to Facebook showed a rowdy group of teenagers shouting in a school hallway at a masked adult.

In a letter to parents on Thursday afternoon, the school's principal explained that the protest was mostly "peaceful" but that a few students needed to have their families contacted and disciplinary measures taken.

"Today, several students left class during period 2, to participate in a protest to express their concerns about the current sanitary measures (mainly the wearing of the mask) at school," wrote principal Nathalie Rollin.

The students "congregated outside" on the sidewalk of Souvenir Blvd., carrying signs. School administrators called police for help, but the protest was under control and most students went back to class and went on with their day, Rollin wrote.

"By the end of recess, most students returned inside the school," she wrote.

"While most students went back to class, others continued walking in the hallways which caused a short disruption at the beginning of the next period. Some students were escorted outside by the administration and the police to listen to their concerns and the reasons behind this protest."

The school board put the group about 50, but some who participated said it was at least 200 at its biggest point.

The teens aren't happy about the mask restrictions back in place for their age group, which require them to wear face coverings everywhere in the school except for the cafeteria, the school board said.

Rollin wrote that they complained "they find it challenging to wear the mask at all times and find it difficult to only have the cafeteria as an option to eat their lunch.

"The cold weather and the fact that restaurants are closed add to their frustration," she wrote.

The school told them it must respect public health rules, including for their own safety, but that it will find "alternate solutions" to the lunchtime issue "so that students can eat in more areas of the school."

She didn't go into detail about what kind of disruption happened inside the school.

"Parents of some students needed to be contacted as some disciplinary measures had to be applied for a minority of students that acted inappropriately," she wrote.

A driver who struck and killed a woman and her three young daughters in Brampton, Ont., nearly two years ago is being sentenced to 17 years behind bars.

The victims of the Buffalo Tops grocery store shooting

The Buffalo Police Department late Sunday released the names of the 10 victims killed in the shooting. Three people were also wounded.

A racist ideology seeping from the internet's fringes into the mainstream is being investigated as a motivating factor in the supermarket shooting that killed 10 people in Buffalo, New York. Most of the victims were Black.

McDonald's to sell its Russian business, try to keep workers

More than three decades after it became the first American fast food restaurant to open in the Soviet Union, McDonald's said Monday that it has started the process of selling its business in Russia, another symbol of the country's increasing isolation over its war in Ukraine.

Canadians welcome Prince Charles and his wife Camilla, the Duchess of Cornwall, as they embark on a three-day, travel-filled visit starting Tuesday. Between what senior government officials, Canadian Heritage, Rideau Hall and Clarence House have released, here's everything we know about the royal tour and its itinerary.

Amber Heard testifies Johnny Depp assaulted her on their honeymoon

'Aquaman' actor Amber Heard told jurors on Monday that Johnny Depp slammed her against a wall and wrapped a shirt around her neck during their 2015 honeymoon on the Orient Express.

The isolated state is one of only two countries yet to begin a vaccination campaign and, until last week, had insisted it was COVID-19-free.

One of Canada's most renowned Second World War flying aces, James "Stocky" Edwards of Comox, B.C., has died at the age of 100.