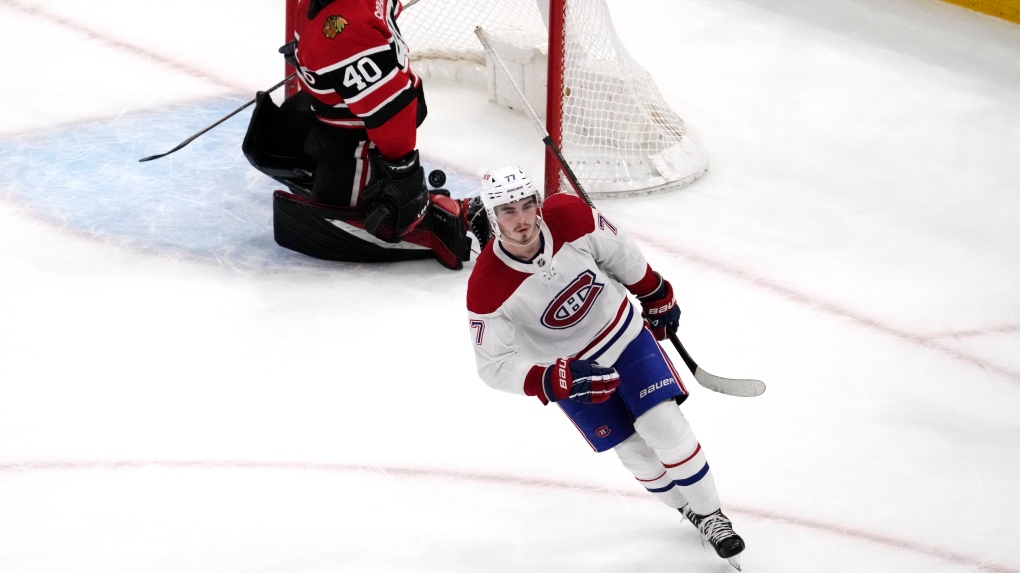 Cole Caufield, Nick Suzuki and Kirby Dach scored in the shootout to give the Montreal Canadiens a 3-2 win over the Chicago Blackhawks 3-2 on Friday.

Suzuki and Joel Edmondson scored in regulation for Montreal, which got its third win in four games.

Traded from Chicago before the NHL draft, Dach beat goaltender Arvid Soderblom with a wrist shot, then held his right hand to his ear as the crowd booed.

"Nice little touch," Dach said of the crowd reaction, which also happened when he took the ice for the pregame warmup. "I play the game on emotion and it just kind of came to me in the moment."

"To have the opportunity to be that guy that seals the deal at the end, it's good that he was in that position," St. Louis said. "You want to play a big game coming back here."

ICYMI: Kirby Dach played the hero in his return to Chicago, helping lift the Canadiens to a 3-2 shootout win over the Blackhawks to wrap-up the Habs' mini two-game road trip on Friday afternoon.#GoHabsGo https://t.co/z52gwJ7Sd5

Chicago carried the play in the final minutes and in the five-minute overtime, and tied the game 2-all with 3:54 left in regulation when Taylor Raddysh scored from the crease on a rebound of Patrick Kane's power-play drive from the high slot.

Sam Montembeault made 30 saves for Montreal.

"We did a really good job of managing the puck," Montembeault said. "If we didn't have anything, we just dumped it in. And guys are blocking a lot of shots. It's great for goalies."

"I think our game's going in a good direction," said Chicago defenseman Caleb Jones, whose first goal of the season tied the game.

Until the dramatic shootout goal, Dach had only one shot on goal. The third-overall pick in the 2019 draft played three seasons for Chicago but never lived up to expectations, with 59 points in 152 games. He's produced with the Canadiens: four goals and 17 points in 21 games.

This report by The Associated Press was first published on Nov. 25, 2022.