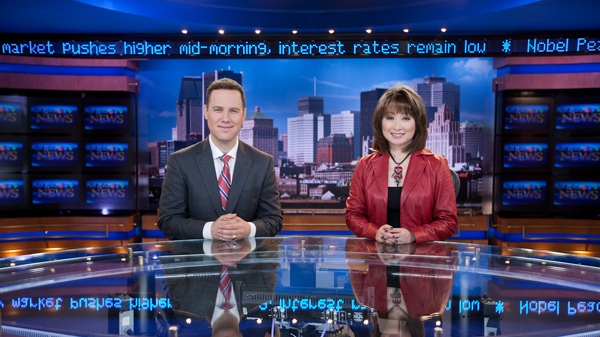 MONTREAL - News anchor Todd van der Heyden will say goodbye to his hometown, and to CTV Montreal, at the end of the year.

Van der Heyden has accepted a new position at CTV News Channel in Toronto, and begins work on a new show in January.

"Montreal has always been my home and I'm so grateful for the opportunities and support the people here have given me," said van der Heyden. "There are a lot of things I still want to do with my career."

Since 2008 van der Heyden has been co-anchoring the top-rated news program in Montreal, CTV News at Six, with Mutsumi Takahashi, but he's been working here for more than a decade.

His presence will be missed, said Don Bastien, Senior Vice-President and General Manager of CTV Montreal.

"We are sad to see him go, but he's staying in the family and we look forward to seeing him reporting on the national stage," said Bastien.

Van der Heyden joined CTV Montreal in 2000 as a reporter, and in 2003 began a focus on consumer affairs as the reporter and producer of the On Your Side segment.

In 2005 he joined Tarah Schwartz on the anchor desk for the weekend news, and two years later began anchoring the noon news with Takahashi.

For the past several years van der Heyden has repeatedly gone to Toronto to fill in as news anchor for CTV News Channel and on Canada AM, and despite his love for his hometown, is looking forward to the new opportunity.

"The move to Toronto and CTV News Channel to anchor a national show is an exciting change. I'm really looking forward to it," said van der Heyden.

His final show in Montreal will be on Friday, Dec. 30, and as of Jan. 16, 2012 van der Heyden will join Amanda Blitz as co-anchors of the daily show Express, which will air on CTV News Channel from 1-4 p.m.

His successor will be announced in the coming weeks.