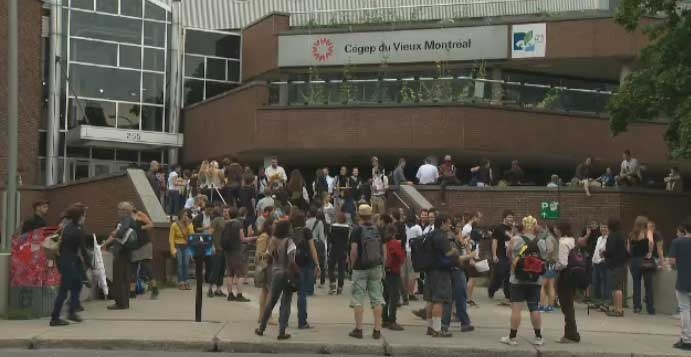 CEGEP du Vieux Montreal is seen in this file photo.

More than 7,000 students at CEGEP du Vieux Montreal are on strike for the next three days.In a general assembly attended by fewer than 1,000 people on Monday evening, the group voted 2-1 in favour of walking out of classes for the rest of the week.

708 students voted to strike, 333 voted against and 19 people abstained.

The vote also included a demand that all criminal charges related to last spring's student movement be withdrawn.

School administrators decided in the wake of the vote to cancel classes on Nov 20, 21 and 22, and shut down the school entirely until until Nov. 23.

Students at CEGEP du Vieux Montreal are known for being the first to walk out of class and the last to return.

This spring there were several violent clashes at the school, and in February police arrested 37 people staging a sit-in. One student arrested during that sit-in is also facing charges in connection to the May 10 smoke-bombing attacks in the Metro.

In August students at CEGEP du Vieux Montreal students were the last to end the class boycott that they had begun in February.