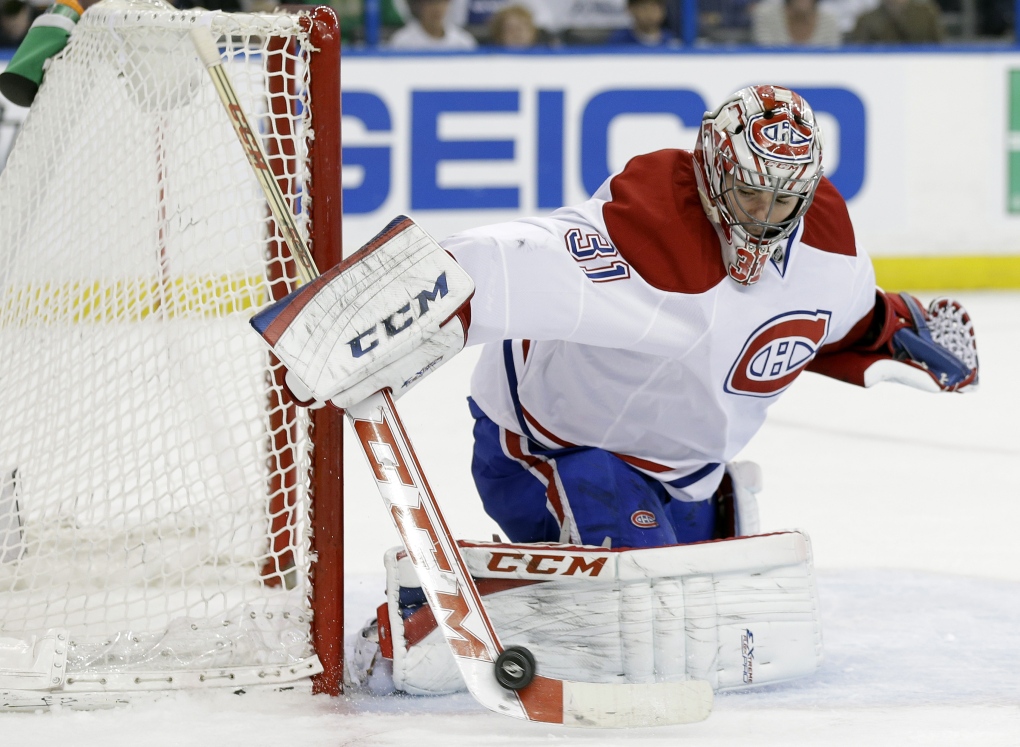 Montreal Canadiens goalie Carey Price makes a save on a shot by the Tampa Bay Lightning during the second period of Game 2 of a first-round NHL hockey playoff series on Friday, April 18, 2014, in Tampa, Fla. (AP Photo/Chris O'Meara)

- The most important horse is Carey Price. This is the Price that won gold in Sochi and the one that has looked so spectacular in the regular season. Focused. Calm. Quiet. Square. Controlled. The Price with this skill set and demeanour has no equal in my mind. I have a new tell for when you know Price is at his best. He is happy to stop the play and let his team catch its breath. An example is Price gets a little 30-foot wrister and he holds on until an opponent gets close and then he waits for the whistle. He is relaxed and within himself so doesn't need for the game to get over with. That's the Price with a quiet mind and a steady pulse. That is the Price that has won WJC gold, and a Calder Cup as the MVP and an Olympic gold. The talent has always been there for Carey. There is no one with more natural talent. The final piece, the Stanley Cup, is waiting for Price to win, but hockey is a team game and no goalie no matter how gifted can win a cup by himself.

- Josh Gorges. The month off because of a broken bone in his hand was the perfect preparation for a guy who is small and dedicated to the point of facing continual danger, who blocks shots and plays with abandon. Gorges gets hammered regularly. He plays so hard that he tires. This rest has him playing so strong and sharp now when usually fatigue is setting in. He's really been a force and he is a great partner for Subban. PK likes to be offensive and can be out of position going for it on the offensive side. When he does, there's Josh to cover and allow PK to move forward.

- Bourque. In all the time I have tried to be understanding about Bourque and my feeling his problem was health I never felt or accused that he was an awful player. Just a scared one. But sometimes you can overcome fear and when you do the better game you have comes out again. Bourque's first goal was an absolute beauty. The second goal he took advantage of some pretty slow lateral movement from the Lightning goalie. This is the Bourque who has a size profile that is hard to defend when he is using it.

- Vanek. What a passer! Just so many skills this player has. It's so odd to me now that over the years, I thought of him as just a goal scorer. I closed my mind before to what this player can actually do. He is a horse to take off the puck. That's why his plus-minus is so good on lousy teams. The component he adds to the Habs with his skill set can't be underestimated. Some size. Some puck winning. First line skills. The excitement the players must have felt that day the Habs acquired Vanek I imagine was insane.

- Lars Eller. Another in your face night for Eller as he shows what he is capable of. Eller can be that prototypical strong defensive centre I have been talking about. Facing a talented centre and winning puck battles over him where keeping control of the puck means that his opposite isn't doing anything at the other end to hurt the Habs. Eller is a holding midfielder on a soccer team, I like to say. Doesn't feel spectacular on the scoresheet to the fans but his opposite is neutralized and that's a good score sheet in an important way.

- Bournival. Speed with strength is no fun to play against. I think this kid has some good upside still.

- Desharnais. What a difference a year makes. Dispossessed so easily by Ottawa last year. He and Pacioretty are giving Tampa fits this year while last year they were giving Ottawa a free pass.

- Michel Therrien. I asked an open-ended question after the game to every Habs player in the locker room. It was: “What do you like best about the Habs right now?” Each one said some form of “We are buying into the system.” That's to the coach's credit. A coach chooses a winning system, then puts his players in a position to succeed with it. The coach has to convince players even though they make more money with more impressive stats that they are going to sacrifice those stats and therefore that bigger money for the "greater good." Many coaches have failed this challenge. It is hard to convince a player that he will get a smaller contract but feel good about himself when he back checks and is on the right side of the puck. Buying into the system means a lot to winning in sports. Most players just go their own way and buy into themselves. Let's see what is next for the Habs but they're saying the right things and playing the right way so far. 20 guys sacrificing for the greater good and not their contracts is a very proud moment for a head coach. He has achieved something pretty impressive. He has altered the egotistical nature of men and taught them to sacrifice for one another. Try that at home and at the office.

- Nah. They're up two in the first round and won them both on the road. I don't have any goats.

- 2006. 2011. Twice the Habs won the first two games on the road. In Carolina and in Boston. Lost both series. Same script now. Up two going home to the Bell Centre where the Habs will try to feed off the energy while staying in control. Get the legs moving while keeping the mind focused and quiet.