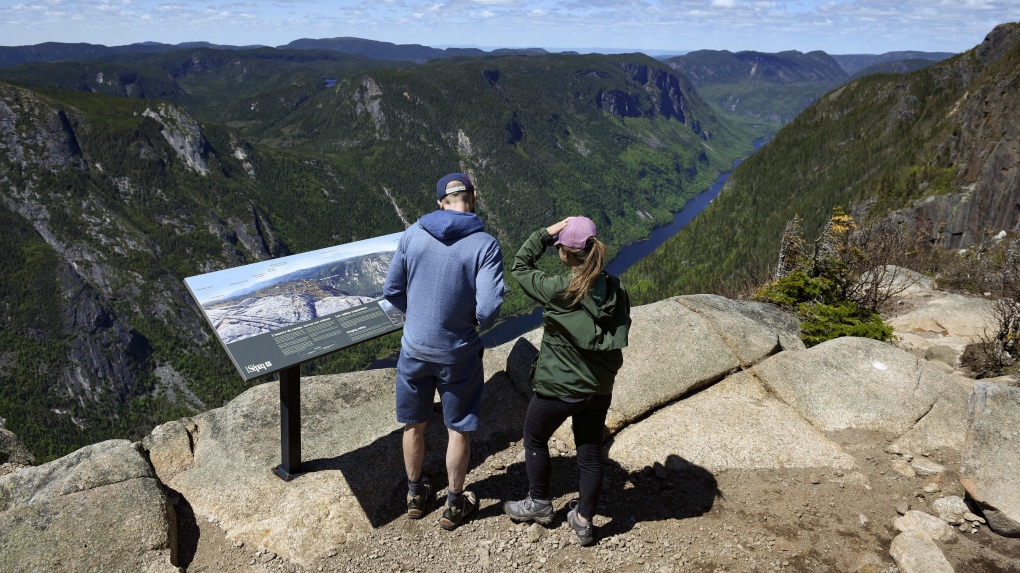 Hikers take in the views from a lookout during a hike in the Hautes Gorges de la Riviere Malbaie National Park, a provincial park in the Charlevoix region of Quebec, on Sunday, June 10, 2018. THE CANADIAN PRESS/Justin Tang

MONTREAL -- Bruno Guilbault says he can't remember seeing anything like it.

The mayor of Rawdon, Que., about 60 kilometres north of Montreal, said municipal parks on the Ouareau River were "overflowing" with out-of-towners last weekend, as the temperature hit 34 C.

The crowd was twice its usual size, Guilbault said, and even though Rawdon put signs up saying the parks were at capacity, people kept coming.

Many parked their cars haphazardly on residents' lawns or near riverbanks, while large groups crowded together at various points on the water, said Guilbault.

The busy weekend pushed the town to close the Dorwin Falls and Cascades parks and a municipal beach to non-residents until June 30 to give it time to put a better system in place and ensure people can maintain physical distancing to prevent the spread of COVID-19.

"I think the decision was easy enough to make. We didn't have a choice," Guilbault said.

Most businesses have been allowed to gradually reopen across Quebec this month, as the number of COVID-19 cases and deaths has decreased.

But the reopening has been met with some trepidation, especially in smaller towns outside Montreal, which was the epicentre of the province's outbreak.

While many of those towns are welcoming the economic boost summer visitors bring, some residents fear an influx of tourists may put them at risk.

A petition launched on June 21 calls on the authorities in the Matawinie region of the Lanaudiere, of which Rawdon is a part, to prioritize the needs of local residents over tourists this summer.

With over 8,000 signatures so far, the petition decries "the outsiders who have taken our beautiful region hostage."

On Thursday, Quebec's public health director Horacio Arruda said the decrease in COVID-19 cases and deaths was good news for the province.

However he said people need to continue respecting physical distancing measures to avoid a potential second wave of the pandemic. "There is still a big need to be careful," Arruda told reporters.

But with most Quebecers unable to travel outside of the province due to the pandemic, local tourist attractions may be busier than usual.

Simon Boivin, a spokesman for Quebec's provincial parks network, known as SEPAQ, said many people have expressed a "keen interest" in visiting this year.

About 140,000 annual passes to SEPAQ's 24 outdoor parks were sold in three days this week, Boivin said.

The passes were on sale for just over $40 -- half the regular price -- thanks to a $5-million investment from Quebec's Tourism Department.

While the number of SEPAQ visitors is only released at the end of the season, Boivin said camping reservations between the end of June to the end of October are already up 11 per cent compared to last year.

"Summer is always a busy period for the SEPAQ network, but we effectively feel that it is more popular this year," he said.

The parks have released an online checklist of health and safety precautions that people can take to minimize the risk of spreading COVID-19.

Information centres and other common areas inside the parks have physical distancing markers in place, and some trails have also been outfitted with signs letting hikers know if the paths are one-way or two-way.

Quebec's Tourism Department said it is up to police to make sure rules around public safety and COVID-19 are respected, and that municipalities can also take steps to manage an influx of tourists.

"We're confident that visitors will act in a way to ensure their safety and that of the places they will spend their vacations," department spokeswoman Virginie Rompre said in an email.

Back in Rawdon, Guilbault said the town's parks and beach will reopen to non-residents at 10 a.m. on June 30.

Additional security guards will be in place and the town has put up no-parking signs to direct visitors.

Guilbault said he is confident things will run more smoothly now, and fears of the region being taken hostage will not materialize. "We don't want any more overflows," he said.

This report by The Canadian Press was first published June 28, 2020.