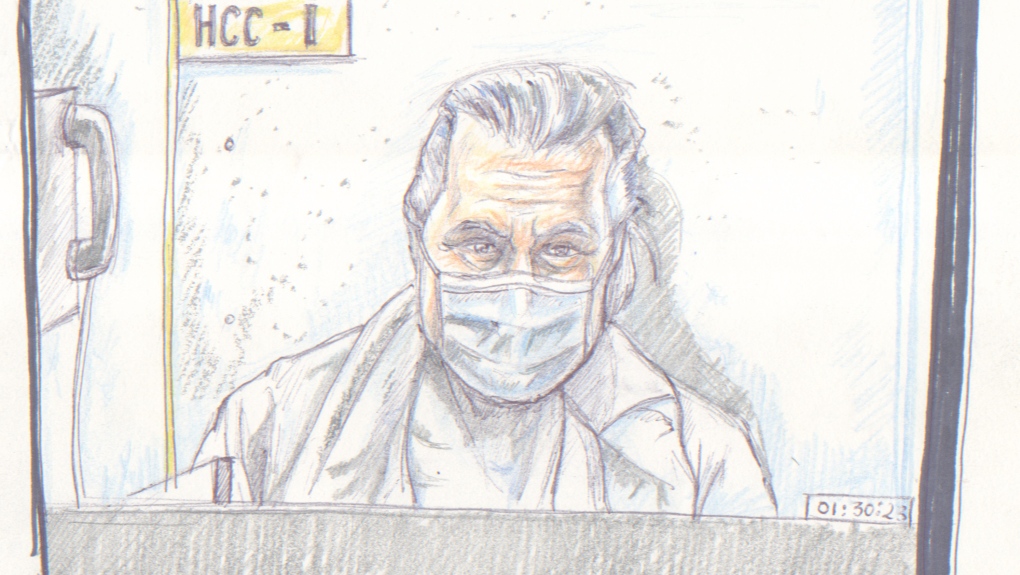 Fashion mogul Peter Nygard is shown during a bail hearing in Winnipeg on Tuesday, January 19, 2021, in this courtroom sketch. Lawyers for the Attorney General of Canada are questioning one of fashion mogul Peter Nygard's former business executives who is offering him a place to live if he is granted bail. A two-day bail hearing is underway in Winnipeg for Nygard, who was arrested in December under the Extradition Act and faces nine counts in the southern District of New York, including sex trafficking and racketeering. THE CANADIAN PRESS/La Liberte Manitoba, Tadens Mpwene - POOL

The Quebec sex crimes case against Canadian fashion magnate Peter Nygard has been postponed to July 8.

Nygard, 80, faces one count of sexual assault and one count of forcible confinement involving the same person. The crimes allegedly took place between Nov. 1, 1997 and Nov. 15, 1998.

Nygard’s case was before a judge in Montreal on Wednesday, after it had been initially postponed on April 4.

At that time, lawyers agreed to delay the case to give his legal team time to deal with Nygard's other legal cases.

He is already detained in Toronto on similar charges, and also faces an extradition warrant for sex-related charges pending in the United States.

- With files from CTV News' Stephane Giroux and The Canadian Press

16 dead, including schoolchildren, after bus falls into gorge in India

A passenger bus slid off a mountain road and fell into a deep gorge in northern India on Monday, killing 16 people, including schoolchildren, a government official said.

After a metre of rain, 32,000 around Sydney, Australia, may need to flee

More than 30,000 residents of Sydney and its surrounds were told to evacuate or prepare to abandon their homes Monday as Australia's largest city faces its fourth, and possibly worst, round of flooding in less than a year and a half.

Pope Francis has dismissed reports that he plans to resign in the near future, saying he is on track to visit Canada this month and hopes to be able to go to Moscow and Kyiv as soon as possible after that.

A vampire-slaying kit once owned by a British aristocrat sparked an international bidding war before selling for six times its estimated price, according to Hansons Auctioneers.