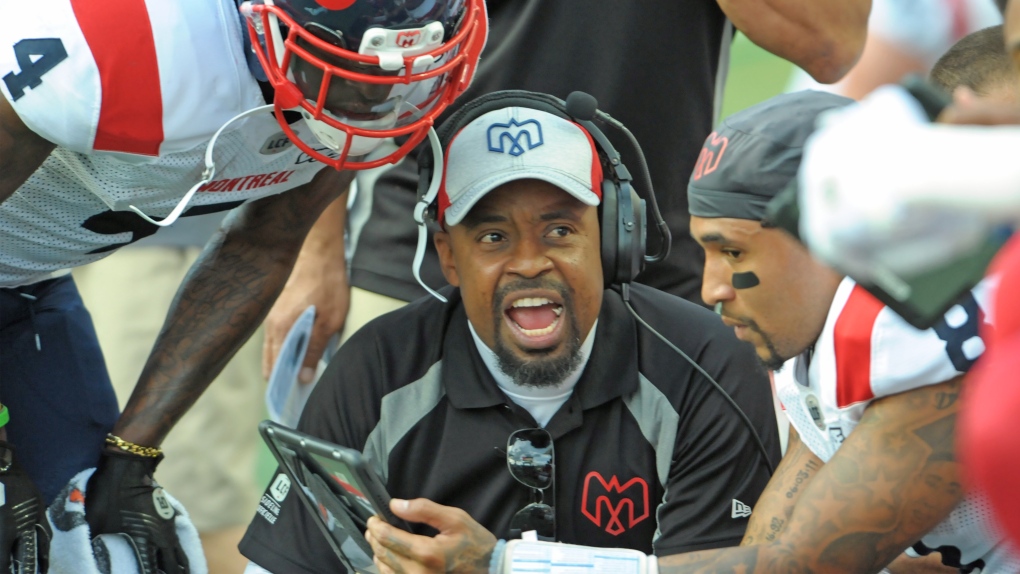 MONTREAL -- Khari Jones doesn't have to look far for a reminder that racism exists in Canada.

The Montreal Alouettes head coach divulged during a teleconference Tuesday he received death threats while he was the quarterback of the CFL's Winnipeg Blue Bombers because of his interracial marriage. Jones is Black and his wife, Justine, is white.

An emotional Jones -- speaking just over a week after a white policeman kneeled on the neck of a Black man, resulting in a tragic death in Minneapolis -- said the threats came in the form of letters that remain in his possession.

"It's just a reminder you always have to be on alert a little bit," Jones said. "It could've been one person but one is still too many and to do that on the basis of a person's skin colour is horrible.

"Every once in a while, every blue moon I take a look at them. They never found the person who wrote the letters -- he used a fake name -- but he's still out there, people like him are still out there. That was 20-something years ago and it's still happening."

Jones, 49, played parts of five seasons with Winnipeg (2000-04). The soft-spoken and amiable Jones was named the CFL's outstanding player in 2001 after leading the Bombers to a 14-4 regular-season record and Grey Cup appearance.

The five-foot-11, 195-pound Jones played for B.C., Winnipeg, Edmonton, Calgary and Hamilton from 1997-07. He rejoined the Bombers in October 2007 and retired as a member of the franchise. Jones began his CFL coaching career in 2009 as Hamilton's quarterback coach.

In the early 1990s during Jones's college days at UC Davis, Jones said himself, his brother, and some friends were wrongly arrested at gunpoint, forced to the ground and handcuffed by white policemen in Sacramento, Calif.

"It was a case of mistaken identity but we called it, at the time, being Black while walking," Jones said. "That's just something that had happened with people you knew and it happened to me, four or five of my friends, my brother was there.

"It's a horrible feeling to be pointed out for something like that."

Jones's eyes welled up discussing the tragic death last week of George Floyd, a 46-year-old Black man who died in Minneapolis while in police custody. With Floyd handcuffed and lying face down, Derek Chauvin, a white policeman, kept his knee on Floyd's neck for almost nine minutes, the final two minutes 53 seconds after Floyd became unresponsive.

Video of the incident was readily available on television and social media. After watching, Jones took to Twitter on Monday -- a rarity for the Alouettes coach -- to express his pain, anger and sadness over Floyd's death.

"I can't stop thinking about George Floyd," Jones tweeted. "He is me.

Jones, entering his second season as Alouettes head coach, said he posted the tweet after talking with Montreal starting quarterback Vernon Adams Jr. Following the Floyd incident, Jones wrote his players about what he'd experienced in his life.

"That's just what I felt when I saw the video," Jones said. "The inhumanity of it was something that struck a chord in me, for sure, and I think in a lot of the world.

Jones said he hasn't spoken to his two teenage daughters about Floyd's death. But he doesn't feel he really has to.

"I just couldn't stop crying (after watching the video) so they knew how it affected me and I think it affected them as well," he said. "I've spoken to them a little bit over the years . . . fortunately we've moved quite a bit in Canada and for the most part, every place we've lived has treated my girls well and treated us well.

"I think fortunately for them they haven't had to deal with (racism) on a first-hand basis all that much, if at all. I've often discussed with them what it can be like in the States, in certain places in particular, just to be aware and to be careful out there. "

But Jones said it is always a challenge.

"When you're Black, you know some things might happen to you," he said. "I knew what to do and how to try to behave when I was stopped for a traffic ticket or something.

"There's just a different way you have to respond to things when tensions are heightened. Canada is, believe me, much better and I feel much better about the social climate but there are still issues."

Last weekend, the CFL and its nine teams all issued statements condemning racism. Saskatchewan Roughriders linebacker Solomon Eliminian, the president of the CFL Players' Association, also outlined his experiences in a letter to union members.

Montreal running back James Wilder Jr. has been a vocal advocate as well. The former Florida State star has participated in peaceful protests in Houston, where he's currently training, and been active denouncing racism on social media.

"I think James is a smart person, I'm going to talk with him," Jones said. "I never want to push the players one way or the other.

"I think these are smart men, they see what I see and they have brains too. I want them to do what they feel is necessary and some things go beyond your job. I'm proud of the players for their responses. I want to go protest too, I want to be out there too. I understand his (Wilder's) pain and frustration with everything."

This report by The Canadian Press was first published June 2, 2020