Warning: Images in this story contain elements some viewers might find disturbing.

A 16-year-old boy named has died after being shot in the upper body Sunday night in Montreal's Saint-Michel neighbourhood.

Friends have identified the teen as Thomas Trudel.

The shooting took place at 9 p.m. at the intersection of Villeray Street and 20th Ave. in the Villeray–Saint-Michel–Parc-Extension borough.

Trudel was found unconscious and pronounced dead on the scene by paramedics.

Montreal police are calling the event a homicide, though the alleged attacker's motives remain unclear. 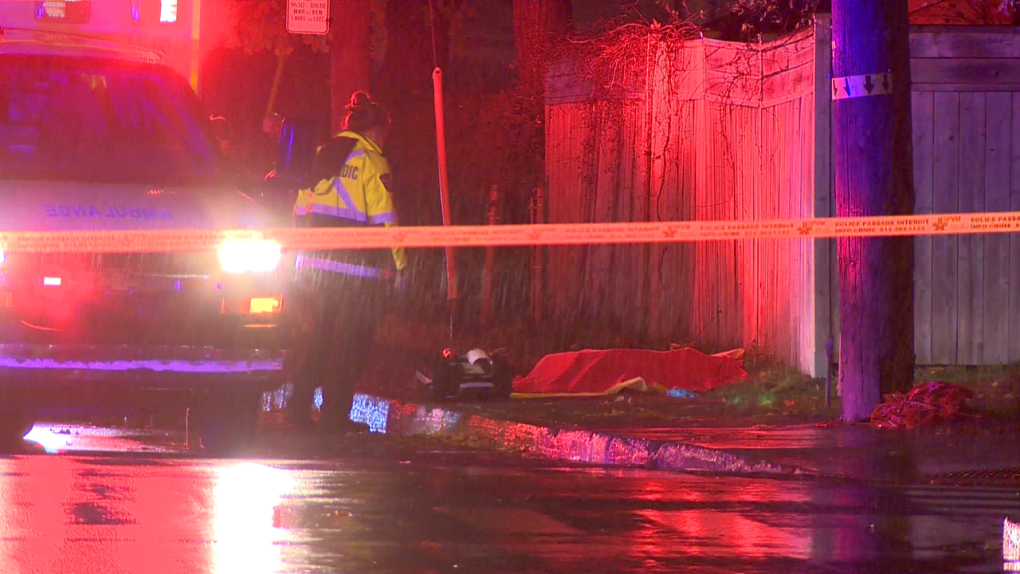 A Montreal paramedic stands over the body of a shooting victim at the intersection of 20th Ave. and Villeray Street on Nov. 14, 2021 (Cosmo Santamaria, CTV News)

A Montreal paramedic stands over the body of a 16-year-old shooting victim at the intersection of 20th Ave. and Villeray Street on Nov. 14, 2021 (Cosmo Santamaria, CTV News)

Trudel was not known to police.

A perimeter has been established and investigators are onsite to determine the circumstances surrounding the shooting.

"Was there more than one? That's what we're asking ourselves. Was there a car involved? A bicycle? Or did the suspect leave on foot?" said Jean-Pierre Brabant, a spokesperson with Montreal police. "All of those questions are going to be asked. Hopefully, we'll have answers to those questions."

There are currently no suspects and no arrests have been made.

Brabant notes the force will be looking at surveillance footage in the area in order to piece things together.

Neighbours in the area say they couldn't believe such a violent incident could occur near their homes.

"I find it shocking. This is such a quiet neighbourhood and there are a lot of kids and families and I have a teenager as well," a neighbour told CTV News.

Trudel's death is considered the 31st homicide on the territory.

Canadian airlines and airports claimed top spots in flight delays over the July long weekend, notching more than nearly any other around the world. Air Canada ranked No. 1 in delays on Saturday and Sunday, according to tracking service FlightAware.

An 'incredibly ill-advised stunt' is being investigated by the Toronto Transit Commission after video emerged of two masked men carrying Canadian flags while surfing on top of a train.